Instituted on 17th October 1930 the Efficiency Medal was awarded to part-time warrant officers, non-commissioned officers and men after twelve years of efficient service on the active list of the Militia or the Territorial Army of the United Kingdom, or of the other Auxiliary Military Forces throughout the British Empire. Service in wartime counted double as did service in West Africa during peacetime.

The Efficiency Medal bears a subsidiary title to denote whether the recipient qualified for its award while serving in the Militia or the Territorial Army or in one of the other Auxiliary Military Forces of the Empire. The subsidiary title was inscribed on a scroll bar attached to the medal suspender, ‘MILITIA’, ‘TERRITORIAL’ or ‘T.& A.V.R.’ in respect of the United Kingdom's Militia, Territorial Army and Territorial and Army Volunteer Reserve respectively, or the name of the applicable country in respect of other Auxiliary Military Forces.

Medals awarded to members of the Auxiliary Military Forces of the British Dominions, Colonies and Protectorates and India bore scroll bars inscribed with the names of the respective countries.

Ribbon – Three ribbons are used with the medal. In the United Kingdom, an alternative ribbon is used when the medal is awarded to members of the Honourable Artillery Company, while a new regular ribbon was introduced in 1967.

Eligibility – Part-time other ranks and some officers

Naming – The name of the recipient was impressed on the rim of the medal.

Description – Silver and silver-gilt oval medal, height 39mm; max width 32mm. The fixed suspender bar, a pair of laurel leaves, is affixed to the medal by means of a single-toe claw and a horizontal pin through the upper edge of the medal. The suspender is decorated on the obverse with a scroll-pattern bar, inscribed to indicate the military force in which the recipient was serving at the time of qualification for the award. The medal obverse shows the monarch’s effigy and has a raised rim on all the versions. The reverse is smooth with a raised rim and bears the inscription ‘FOR EFFICIENT SERVICE’ in three lines. On the South African version, the Afrikaans and English inscriptions are ‘VIR BEKWAME DIENS’ and ‘FOR EFFICIENT SERVICE’, each language in three lines. 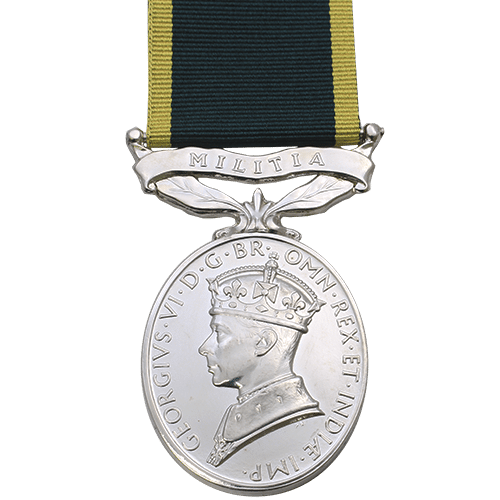