Instituted on 17th October 1930 the Efficiency Decoration (ED) replaced several former long service awards including the Volunteer Officers’ Decoration, the Colonial Auxiliary Forces Decoration and the Territorial Decoration. The medal was awarded for long and meritorious service by officers of the United Kingdom's Volunteer Force. Initially, to be eligible for the award of the Efficiency Decoration (ED) twenty years of qualifying service was required but this was reduced to twelve years in 1947. At this time clasps for additional periods of qualifying service were also approved. Half of any time spent in the ranks may be counted towards the qualifying period and time spent on continuous full-time service as an officer during the period 3rd September 1939 until 28th April 1952 inclusive may be counted as double qualifying time.

The medal ribbon is suspended from a rectangular silver bar-brooch, inscribed "TERRITORIAL" in respect of the Territorial Army or with the name of the applicable country in respect of other Auxiliary Military Forces: ‘TERRITORIAL’ (UK), ‘INDIA’, ‘CANADA’, ‘FIJI.’ In South Africa a bilingual subsidiary title was used, with the bar-brooch inscribed "UNION OF SOUTH AFRICA" and "UNIE VAN SUID-AFRIKA" in two lines. In 1969 the British suspender bar changed to ‘T & AVR’, on establishment of the Territorial and Army Volunteer Reserve. In 1982 the title Territorial Army was resumed, so the inscription on the bar reverted to ‘TERRITORIAL’ but the blue, yellow and green ribbon was retained

Ribbon – Three ribbons are used with the decoration. In the United Kingdom, an alternative ribbon is used when the decoration is awarded to officers of the Honourable Artillery Company, while a new regular ribbon was introduced in 1967.

Naming – Rank, initials and surname of the recipient impressed around the perimeter in some countries.

Bars / Clasps – A bar defaced in the centre by a crown and royal cypher was awarded for six years’ additional service, with the year of the award impressed on the reverse.

Description – Silver and silver-gilt skeletal medal, height 54mm, max width 37mm. The obverse of the medal is an oval oak leaf wreath in silver, tied with gold, with the Royal Cypher of the reigning monarch in the centre below the Royal Crown, both in gold. Four versions of the decoration have been awarded. The reverse is smooth and undecorated, with the year the decoration was awarded impressed at the bottom on decorations awarded in the United Kingdom, or with the rank, initials and surname of the recipient impressed around the perimeter in some countries.

Three ribbons are used with the decoration. In the United Kingdom, an alternative ribbon is used when the decoration is awarded to officers of the Honourable Artillery Company, while a new regular ribbon was introduced in 1967. 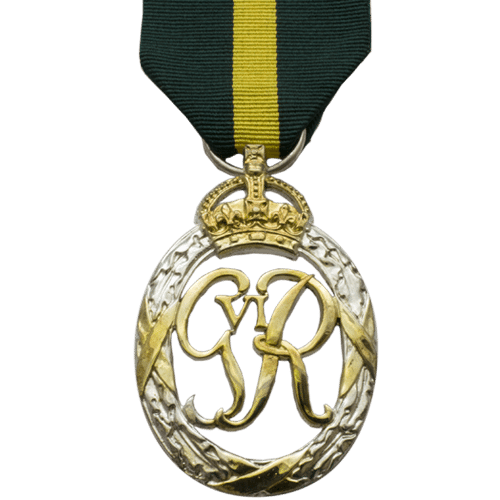