The Ebola Medal is a service medal for issue to the Armed Forces, and civilians working either for Her Majesty’s Government or non-governmental organizations in support of the British Government’s response to the Ebola crisis that began in 2014.

Ribbon: The ribbon consists of a central yellow stripe, flanked by blue and white stripes, and symmetrical red stripes flanked by green stripes either side. These represent the colours from the national flags of the countries in West Africa affected by Ebola.

Naming: Name and title if civilian; name and rank if military is engraved on the rim

Description: A circular silver medal. The obverse has the legend ‘ELIZABETH II DEI GRATIA REGINA FID.DEF.’ and the effigy of Elizabeth II wearing the Girls of Great Britain and Ireland tiara. The reverse features a flame on a background depicting the Ebola virus – above this are the words ‘FOR SERVICE’ and below ‘WEST AFRICA EBOLA EPIDEMIC’. 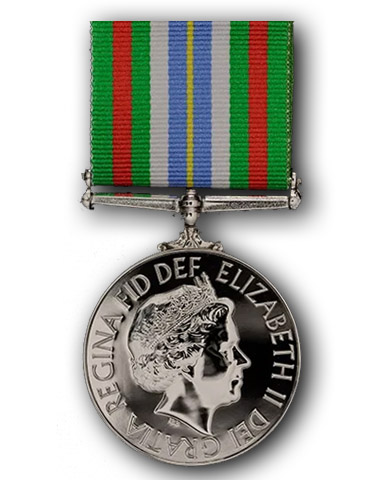