The Distinguished Service Medal (DSM) was established on 14th October 1914 and awarded to petty officers and ratings of the Royal Navy, NCOs and other ranks in the Royal Marines and all other persons holding corresponding ranks or positions in the naval forces, who "show themselves to the fore in action, and set an example of bravery and resource under fire, but without performing acts of such pre-eminent bravery as would render them eligible to receive the Conspicuous Gallantry Medal (CGM)”. It was later extended to cover the Merchant Navy and Army, the WRNS and RAF personnel serving aboard ships in the Second World War.

The DSM was the Other Ranks' equivalent to the Distinguished Service Cross (DSC), which was awarded to commissioned officers and Warrant Officers, although it ranked below that decoration in order of precedence, between the George Medal (GM) and the Military Medal (MM) after those medals' respective establishments in 1940 and 1916.

Ribbon – Dark blue, white, and dark blue, with a thin dark blue stripe down the centre of the white

Eligibility – Other ranks of the British and (formerly) Commonwealth forces

Awarded for – Setting an example of bravery and resource under fire

Description – Silver circular medal 36mm diameter – The obverse of the medal bears the crowned effigy of the reigning monarch. The reverse has the inscription 'FOR DISTINGUISHED SERVICE' in three lines, within a laurel wreath surmounted by an Imperial crown. 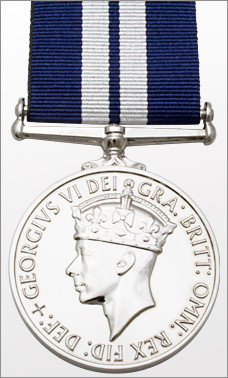