The Distinguished Flying Medal was a military decoration awarded to personnel of the Royal Air Force (United Kingdom) and the other services, and formerly also to personnel of other Commonwealth countries, below commissioned rank, for "an act or acts of valour, courage or devotion to duty whilst flying in active operations against the enemy".

The medal was established on 3rd June, 1918. It was the other ranks' equivalent to the Distinguished Flying Cross, which was awarded to commissioned officers and Warrant Officers (although WOs could also be awarded the DFM), although it ranked below the DFC in order of precedence, between the Military Medal and the Air Force Medal. Recipients of the Distinguished Flying Medal are entitled to use the post-nominal letters "DFM".

During World War II, 6,637 DFMs were awarded, with 60 first award bars. Some 165 were awarded to aircrew from other non- Commonwealth countries.

Ribbon – Consists of alternate violet and white stripes leaning 45 degrees to the left. A violet stripe is to appear in the bottom left and upper right corners when viewed on the wearer's chest. (Note that the original ribbon was purple and white horizontal stripes until July 1919.)

Awarded for – exceptional valour, courage or devotion to duty whilst flying in active operations against the enemy

Clasps – Further awards are signified by a straight slip-on silver bar with an eagle in the centre.

The reverse shows Athena Nike seated on an aeroplane, a hawk rising from her right arm above the words “FOR COURAGE,” all within a laurel wreath. Originally undated, but the date “1918” was added to the reverse with the advent of the George VI.

For subsequent acts meriting the DFM, a bar was awarded to be worn on the ribbon of the medal. 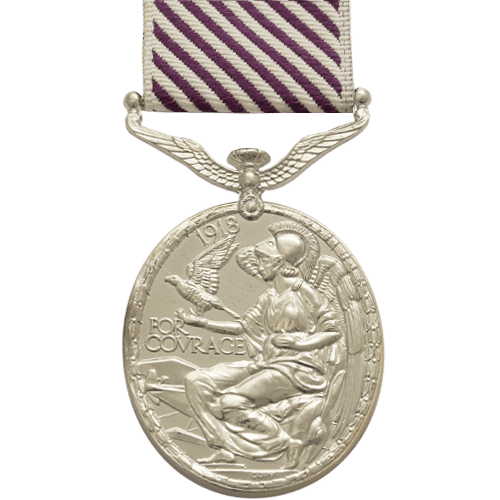