Established on June 3rd, 1918, the birthday of King George V the Distinguished Flying Cross (DFC) is awarded to personnel of the United Kingdom's Royal Air Force (RAF) and other services, and formerly to officers and Warrant officers of other Commonwealth countries, instituted for "an act or acts of valour, courage or devotion to duty whilst flying in active operations against the enemy".

The award was established shortly after the formation of the RAF. It was originally awarded to air force commissioned officers and to Warrant Officers. During World War Two it was also awarded to Royal Artillery officers from the British Army serving on attachment to the RAF as pilots-cum-artillery directors. Since World War Two, the award has been open to army and naval aviation officers, and since 1993 to other ranks as well; the Distinguished Flying Medal, previously awarded to other ranks, has been discontinued.

During the Great War, a total of approximately 1,100 DFCs were awarded, with 70 first bars and 3 second bars.

During the Second World War, 20,354 DFCs were awarded (the most of any award), with approximately 1,550 first bars and 45 second bars.

Honorary awards were made on 964 occasions to aircrew from other non-commonwealth countries.

In 2008, Flight Lieutenant Michelle Goodman became the first woman to receive the DFC.

Ribbons:    Medals are worn suspended from their own specific ribbons. These were first made of silk but cotton was increasingly used as the nineteenth century developed. Their own colours often have a symbolic significance: the equal stripes of the ‘1939 to 1945 Star,’ for example, are dark blue to represent the service of the Royal and Merchant Navies, red, to represent that of the Armies and light blue to represent that of Air Forces.

Awarded for – Exemplary gallantry during active operations against the enemy in the air.

Naming – The DFC is issued unnamed.

Post Nominals - Recipients of the Distinguished Flying Cross are entitled to use the post-nominal letters "DFC".

Bars / Clasps - A bar is added to the ribbon for holders of the DFC who received a second award.

Description – Silver cross, height 60mm; max width 54mm – The medal obverse is a cross flory terminating with a rose, surmounted by another cross made of aeroplane propeller blades superimposed on the vertical arms of the cross, and wings on the horizontal arms. In the centre is a laurel wreath around the ‘RAF’ letters, surmounted by an Imperial Crown. The reverse features the Royal Cypher ‘GV’,’ GVI’ or ‘EIIR’ in the centre and the year of issue engraved on the lower arm 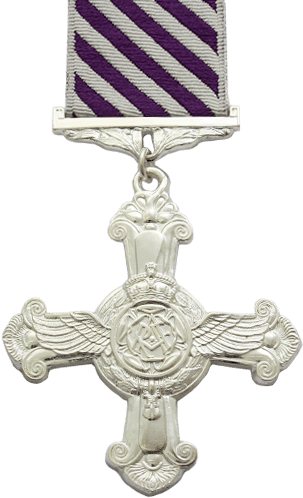