The Distinguished Conduct Medal (DCM) was (until 1993) an extremely high level award for bravery. It was a second level military decoration awarded to other ranks of the British Army and formerly also to non-commissioned personnel of other Commonwealth countries. Recipients are entitled to the post-nominal letters DCM and were announced in the London Gazette, accompanied by a citation.

The medal was instituted by Royal Warrant on 4th December 1854, during the Crimean War, to recognise gallantry within the other ranks, for which it was equivalent of the Distinguished Service Order (DSO) awarded for bravery to commissioned officers, but the DCM ranked well below the DSO in precedence. Prior to the institution of this decoration, there had been no medal awarded by the British government in recognition of individual acts of gallantry in the Army.

Although the Distinguished Conduct Medal remained available the lesser Military Medal was usually awarded from the spring of 1916 other than for exceptional acts of bravery.

From 1942, members of the Royal Navy, Royal Air Force and the Navy’s and Air Forces of the Dominions and Colonies also became eligible for the award.

In 1993 the medal was replaced by the Conspicuous Gallantry Cross after a review of the operational gallantry award system.

Awarded for – Gallantry in the field

Naming – All medals awarded bear the recipient’s number, rank, name and unit on the rim

Description – A silver medal 36 mm in diameter. The original obverse of this medal depicted a trophy of arms as seen on early Army Long Service and Good Conduct Medals. However in 1902 after the accession of King Edward VII, the effigy of the reigning monarch replaced the trophy of arms, with the respective titles of the monarchs inscribed around the perimeters-

The reverse on all issues bears the four line inscription "FOR DISTINGUISHED CONDUCT IN THE FIELD" underlined by a laurel wreath between two spear blades.

A Bar to the medal, introduced in 1881, could be awarded in recognition of each subsequent act of distinguished conduct for which the medal would have been awarded. 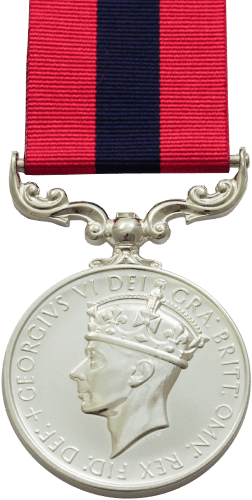