The Defence Medal was a campaign medal of the British Commonwealth, awarded for service in World War II. It was instituted to recognise both military and some types of civilian service.

This type of service in the UK includes, but is not confined to, those civilian personnel who worked as members of:

The qualifying time required depending on the area served is:

This medal's qualification requirements are numerous and varied. They have been summarised into the following points.

•        Service in the Forces in non-operational areas subjected to air attack or closely threatened, providing such service last at least three years.

•        Non-operational service in the Forces overseas or outside the country of residence, providing that this service lasted for at least one year. If the territory was threatened by the enemy, or subjected to air raids, the duration requirement was reduced to six months.

•        Members of any of the civilian services entitled to wear chevrons for their war service were eligible for this medal.

•        Members of the Home Guard resident in the UK, who had completed at least three years service.

The Defence Medal was also awarded for non-operational service overseas, for example in India or South Africa.

Ribbon – Centre flame coloured with green edges, symbolical of the enemy attack on our green land. The black-out will be forever commemorated by two thin black stripes down the centre of the green one.

Description – Cupro-nickel or silver disk 36mm dia.  The Canadian version was in 0.800 silver. The obverse of the award has the coinage head of King George VI, facing left, and the legend: ‘GEORGIVS VI D:G:BR:OMN:REX F:D:IND:IMP:’ (George 6th, by the grace of god, king of all the Britain’s, defender of the faith, emperor of India) . The reverse shows the Royal Crown resting above a small oak tree and flanked by a lion and lioness. The dates ‘1939’ and ‘1945’ appear in the top left and right respectively on the reverse, whilst beneath are the words ‘THE DEFENCE MEDAL’ in two lines. 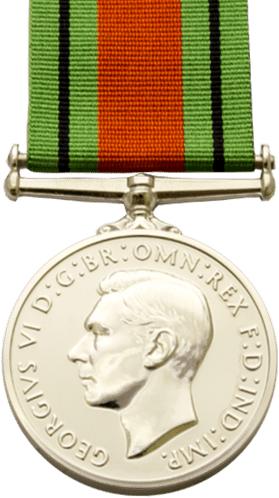