Created in 1993 and first awarded in 1995 the Conspicuous Gallantry Cross (CGC) is a second level military decoration of the British Armed Forces which could be awarded posthumously for “recognition of an act or acts of conspicuous gallantry during active operations against the enemy”. All ranks of the Royal Navy, Royal Marines, British Army, and Royal Air Force may be awarded the CGC in recognition of qualifying acts of gallantry. Personnel who perform a further act of such gallantry which would have merited a second award of the CGC would be issued with a silver bar.

The Victoria Cross is the only higher combat gallantry award presented by the United Kingdom.

Ribbon – White with blue edges and a red central stripe.

Awarded for – an act or acts of conspicuous gallantry during active operations against the enemy.

Clasps – Bars are awarded to the CGC in recognition of the performance of further acts of gallantry meriting the award.

Description – 36mm maximum width; silver cross Patèe imposed on a wreath of laurel, with the Royal Crown in a circular panel in the centre. Suspended by a ring from a plain (straight) suspension bar. 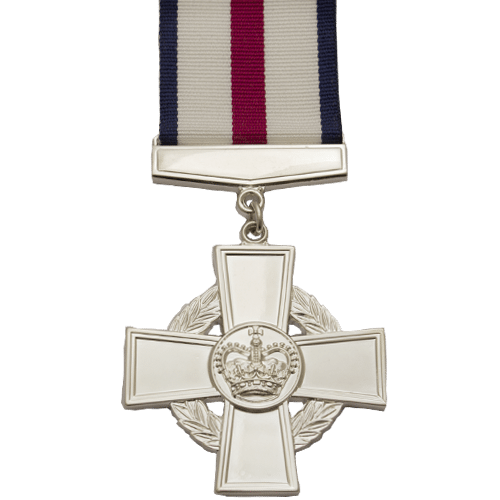