Instituted by Her Majesty Queen Elizabeth II in March 1961 the Civil Defence Long Service Medal was a long service award in the United Kingdom and associated territories. It was awarded for fifteen years’ continuous service in a variety of different organizations including the Auxiliary Fire Service, National Hospital Service Reserve, United Kingdom Warning and Monitoring Organisation and the Civil Defence Corps. It was extended to Civil Defence personnel in Gibraltar, Hong Kong, Channel Islands, Isle of Man and Malta in 1965.

Ribbon – Blue ribbon with three narrow stripes of yellow, red and green (the yellow being worn farthest from the left shoulder.)

Naming – The medals were issued unnamed

Description – Oval cupro-nickel medal height 38mm, max width 32mm. On the obverse is the crowned head of Queen Elizabeth II and the legend ‘ELIZABETH II DEI GRATIA REGINA FID. DEF.’ The medal reverse depicts three shields bearing the initials of the three main services ‘CD’,  ‘AFS’ and ‘NHSR’ with and oak branch in the background. A Northern Ireland version exists with the lower shields bearing ‘AFRS’ and ‘HRS’. After 1968 a new reserve was used incorporating the words ‘CIVIL DEFENCE’ and ‘LONG SERVICE’.

Some of the material on this page was also partially derived from<en.wikipedia.org/wiki/ Civil_Defence_Medal > 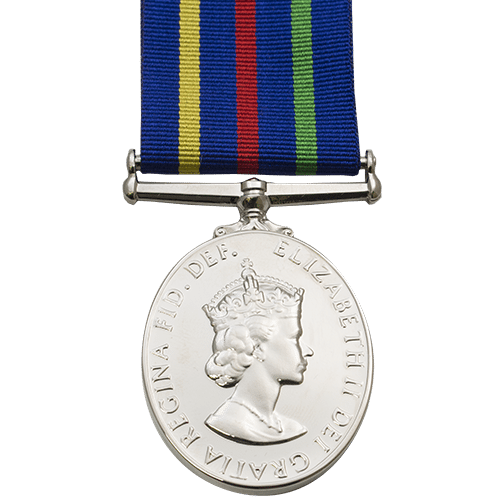