British uniform regulations stipulated that the Pacific Star would not be awarded to a recipient of the Burma Star. Those recipients who qualified for both campaign medals of the Pacific Star and Burma Star were awarded a Silver rosette to be worn of the Star that was first earned when the ribbons alone are worn.When the Burma Star medal is worn by the recipient he is entitled to wear a ‘Bar’ with the title ‘Pacific’ attached to the ribbon.

Ribbon width can vary slightly though it is generally 32mm wide

Eligibility – One day operational service, or one sortie for aircrew (six months for Naval personnel)

Campaign – Service in the Pacific Theatre between 11th December 1941 and 2nd September 1945.

Description – The Burma Star is a six–pointed star of yellow copper zinc alloy, with a height of 44mm and a maximum width of 38mm.  The obverse of the star is comparable in design to the Gwalior Star from the campaign of 1843.  The centre of the star is the Royal Cipher of King George VI, surmounted by a crown overlaid on a circlet which bears the title of the award ‘The Burma Star.’  The reverse of this medal is the same as other WWII Star campaign medals and plain, with no naming.

Awarded to those who subsequently qualified for the Pacific Star. 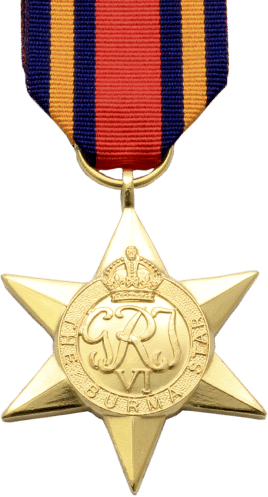