The British War Medal was a campaign medal of the British Empire, for service in World War One.  It commemorates some of the most terrible battles the world has ever known.  The casualities in the Ypres Salent and on the Somme for 1915 to 1918 were more than our total for the Second World War

The medal was approved in 1919, for issue to officers and men of British and Imperial forces who had rendered service between 5th August 1914 and 11th November 1918. Officers and men of the Royal Navy, Royal Marines, and Dominion and Colonial naval forces (including reserves) were required to have completed 28 days mobilised service – the medal was automatically awarded in the event of death on active service before the completion of this period.

The medal was later extended to cover  and award the services in the period 1919–20 for  mine-clearing at sea as well as participation in operations in North and South Russia, the eastern Baltic, Siberia, the Black Sea, and the Caspian.

This medal was issued singly without the Allied Victory Medal to certain regular and mobilized personnel who did not see any fighting.

Ribbon – 32mm wide. A broad orange watered stripe down the centre bordered with white, black and blue ones.

Ribbon – 32mm wide. A broad orange watered stripe down the centre bordered with white, black and blue ones.

Suspension – by a plain, straight suspender, which does not swivel.

Naming – In faint indented block capitals.  Medals awarded to officers do not give the name of their regiment

The medal is a circular silver (or, in rare cases, bronze) design.  Obverse shows a King George V bareheaded effigy, facing left, with the legend ‘GEORGIVS V BRITT: OMN: REX ET IND: IMP:’ (George 5th, King of all the Britain’s, and, Emperor of India).  Reverse shows St. George, naked, on horseback armed with a short sword (an allegory of the physical and mental strength which achieves victory over Prussianism). The horse tramples on the Prussian shield and the skull and cross-bones. Just off-centre, near the right upper rim, is the sun of Victory. The dates 1914 and 1918 appear in the left and right fields respectively.

Bars were proposed for the British War Medal 1914-20, 68, for the Navy and 79 for the Army.  Naval bars were authorised, but in the end the award of the bars was abandoned, although naval bar are frequently encountered on miniatures. 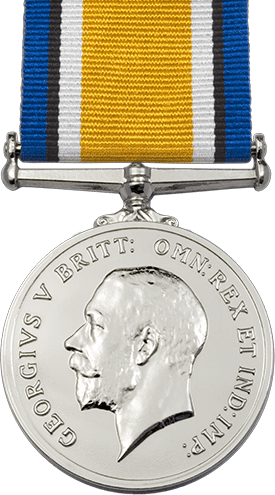