The British Empire Medal is a British medal awarded for meritorious civil or military service worthy of recognition by the Crown.

Recipients are entitled to use the post-nominal letters "BEM" and it is divided into civil and military medals in a similar way to the Order of the British Empire itself.

In 1922 the original medal was split into two new honours.

From 1940, the British Empire Medal for Meritorious Service could again be awarded for gallantry, but now for acts of bravery (not in the face of the enemy) which were below the level required for the George Medal and to the same classes of people awarded the BEM for other services (with more senior recipients receiving the Order of the British Empire).

From 14th January 1958 these awards were instead designated as the British Empire Medal for Gallantry and consisted of the Medal of the Order of the British Empire for Meritorious Service with a silver oak leaf emblem worn on the ribbon.

Between 1993 and 2012, the British Empire Medal was not awarded to subjects of the United Kingdom, although it continued to be awarded in some Commonwealth realms during that time. The practice of awarding the British Empire Medal to subjects of the United Kingdom was resumed in June 2012, to coincide with the Queen's Diamond Jubilee, although only in the civil division. In the 2012 Birthday Honours, released on 16 June 2012, the BEM was awarded to 293 people.

Type – Medal affiliated with an order

Eligibility – Members of the Commonwealth

Description – Silver circular medal 36mm diameter - On the obverse the medal shows the seated figure of Britannia, her left hand resting on a shield and her right holding a trident, with a blazing sun in the upper right. The words ‘FOR GOD AND THE EMPIRE’ inscribed round the upper part of the circumference, and the words ‘FOR MERITORIOUS SERVICE’ in the exergue. (The Empire Gallantry Medal (EGM) had the inscription ‘FOR GALLANTRY’ on the bottom.) On the reverse of the award is the Royal Cypher surmounted by a crown with the words: ‘INSTITUTED BY KING GEORGE V’ within a border of four heraldic lions. 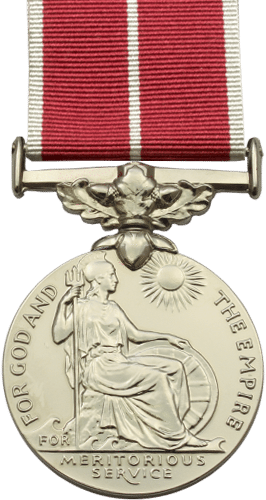