Awarded for service in World War Two, the Atlantic Star is a campaign medal of the British Commonwealth.

The Star was to commemorate the Battle of the Atlantic which took place between 3rd September, 1939 and 8th May, 1945, while Allied convoys transporting goods and valuables from America and the colonies were under attack by German U-boats. The medal was granted for ‘six months’ afloat in the Atlantic, Home Waters, parts of the South Atlantic and convoys to Russia.

Awarded to personnel of the Royal Navy and Merchant Navy, provided they had earned the 1939-45 Star for six months service in operational areas.  The locations and areas differ from the Royal Navy and Merchant Navy to qualify for this campaign medal.  Special conditions apply governing this award for those Naval personnel entering service less than six months before the end of the qualifying period, provided it was the last operational theatre that they would serve.

The Atlantic Star was also awarded to the R.A.F and aircrew who took part in operations against the enemy at sea within the qualifying areas, subject to two months service in an operational unit.  However, the 1939-1945 Star medal must also be earned by the recipient before commencing qualifying service for the Atlantic Star medal.

In common with other campaign stars, the Atlantic Star was awarded to those whose service period was terminated by death, disability or wounding.  Also the award of a gallantry medal or Mention in Despatches led to an immediate award.

Due to British uniform regulations, neither the France and German Star nor the Air Crew Europe Star would be worn by a recipient of the Atlantic Star.  The recipient of this medal could wear a silver rose emblem on the ribbon of the first star when wearing the ribbons without the medals attached.  Due to the recipient only being allowed to wear one emblem there is no way of telling whether they qualified for the Air Crew Europe or France Germany Star as the pattern is the same for both.  When the Atlantic Star is worn the appropriate clasp/bar can be fitted to the ribbon with the title ‘Air Crew Europe’ or ‘France and Germany’, however regulations state that only the first clasp earned can be worn with the medal.

Qualifying details for the Navy.

Qualifying details for the Merchant Navy.

Qualifying details for the R.A.F

Ribbons:     Medals are worn suspended from their own specific ribbons. These were first made of silk but cotton was increasingly used as the nineteenth century developed.  Their own colours often have a symbolic significance: the equal stripes of the ‘1939 to 1945 Star,’ for example, are dark blue to represent the service of the Royal and Merchant Navies, red, to represent that of the Armies and light blue to represent that of Air Forces.

Ribbon –  Shaded watered stripe of blue, white and sea green to signify the Atlantic.  Worn with the blue edge furthest from the left shoulder

Description – The Atlantic Star is a six–pointed star of yellow copper zinc alloy, with a height of 44mm and a maximum width of 38mm. The obverse of the star is comparable in design to the Gwalior Star from the campaign of 1843.  The centre of the star is the Royal Cipher of King George VI, surmounted by a crown overlaid on a circlet which bears the title of the award ‘The Atlantic Star’.  The reverse of this medal is the same as other WWII Star campaign medals and plain, with no naming.

Clasps are commonly, although not strictly, also referred to as ‘bars’.  They are single-faced metal bars carried on a ribbon attached to the medal, indicating service in a particular campaign or battle.  The clasps carry side flanges to enable them to be attached to the medal and riveted to each other, so that new ones can be attached as earned.  Usually the first earned Clasp is borne nearest to the medal, so that the latest earned should be at the top, although they can be found in the wrong order.

Awarded to those who subsequently became entitled to the Air Crew Europe Star.

Awarded to those who subsequently became entitled to the France and Germany Star. 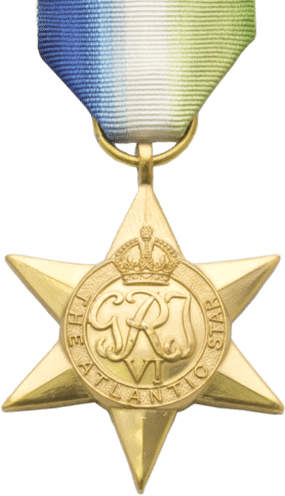