The Arctic Star is a campaign medal of the United Kingdom, awarded to members of the British Armed Forces and Merchant Navy for service in World War II.  This was for support of Convoys in North Russia.

The Arctic Star is a backdated award, coming nearly seventy years after the end of conflict in World War Two.  The campaign medal follows Sir John Holmes' independent review and the announcement by the Prime Minister, David Cameron, on the 19th December, 2012 that these awards should be made in recognition of the great bravery of those who contributed to two very significant campaigns.  Veterans of the Arctic Convoy campaigns will get recognition with an Arctic Convoy Star medal. Meanwhile, the aircrew of Bomber Command who played such a vital role in the war will be awarded a Bomber Command clasp.

“I’m very pleased that some of the brave men of the Arctic Convoys will get the recognition they so richly deserve for the very dangerous work they did.”

“On Bomber Command, Sir John concluded they have been treated inconsistently with those who served Fighter Command. He’s therefore recommended – and I also agree - that the heroic aircrews of Bomber Command should be awarded a Bomber Command clasp.”

On 26th February, 2013 it was announced by Minister of State for Defence Personnel, Welfare and Veterans Mark Francois that all the details have been confirmed for the Arctic Star and the Bomber Command Clasp and the application process had opened.

“My own father served in World War Two and I believe those that have served our country in Bomber Command and on the Arctic Convoy deserve nothing but the utmost respect and admiration from us all. I am delighted that I can confirm that both of these special groups of men who served will be able to receive a new form of recognition.”

The Arctic Star was formally approved by The Queen on recommendations made by the Royal Mint Advisory Committee. The design is based on the existing World War Two Campaign Stars, and the ‘Bomber Command’ Clasp, to be worn on the ribbon of the ‘1939 to 1945 Star, followed the design of the ‘Battle of Britain’ Clasp.  Production of this award was from early 2013, it was to be awarded to living veterans and when passed away, their living relatives. Relatives or Veterans have to apply for the decoration themselves. Living veterans and widows were given priority in the presentation of the award in recognition of their contribution.

The Arctic Star Medal is awarded for operational service of any length north of the Arctic Circle, 66 degrees, 32’North Latitude from the 3rd September, 1939, to the 8th May, 1945, inclusive.  The Arctic Star is intended to commemorate the service personnel of the Arctic Convoys to North Russia and their Escorts.

Qualifying details for the Civilians serving in the Forces.

Eligibility for the Arctic Star does not affect an individual's eligibility for any other previously awarded campaign medals, nor does it automatically entitle individuals for any further awards. (ref: Veterans-UK)

Ribbons:     Medals are worn suspended from their own specific ribbons. These were first made of silk but cotton was increasingly used as the nineteenth century developed.  Their own colours often have a symbolic significance: the equal stripes of the ‘1939 to 1945 Star,’ for example, are dark blue to represent the service of the Royal and Merchant Navies, red, to represent that of the Armies and light blue to represent that of Air Forces.

Eligibility – Members of the British Armed Forces and Merchant Navy.

Naming – All issued unnamed by the British Government.

Description – The Arctic Star is a six–pointed star of yellow copper zinc alloy, with a height of 44mm and a maximum width of 38mm.  The obverse of the star is comparable in design to the Gwalior Star from the campaign of 1843.  The centre of the star is the Royal Cipher of King George VI, surmounted by a crown overlaid on a circlet which bears the title of the award ‘The Arctic Star.’  The reverse of this medal is the same as other WWII Star campaign medals and plain, with no naming.

The criteria for the Bomber Command Clasp require prior qualification for the 1939 to 1945 Star.

Eligibility is extended to those members of Bomber Command aircrew who did not meet the qualifying criteria due to service being brought to an end by death, wounds or other disability due to service, service marked by a gallantry award or taken as a prisoner of war.

Foreign nationals commissioned or enlisted into British or, the then, Dominion Air Forces (e.g. Royal Canadian Air Force or Royal Australian Air Force) are eligible provided the individuals did not receive a similar award from their own Government.

The award of the Clasp is to be denoted by a silver rose Emblem when the ribbon alone is worn. 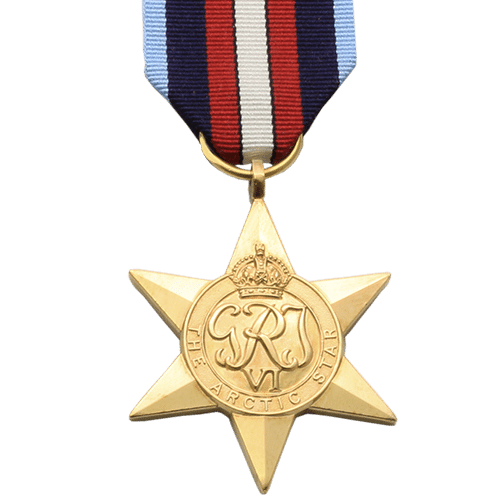