Instituted 5th July 1996 the Ambulance Service (Emergency Duties) Long Service and Good Conduct Medal was awarded to recognise long service to both full and part time members of the Ambulance Services provided they are employed on emergency duties within England, Wales, Scotland, Northern Ireland, the Isle of Man, or the Channel Islands.

The medal would be awarded for twenty years of commendable service to Ambulance Paramedics, Technicians, and Ambulance Officers. Ambulance Officers and other management grades must have served at least seven years on emergency duty. Service prior to 1974 in an ambulance service maintained by a local authority may also be counted.

Ribbon – Green with white edges. The edges are bisected by a narrow green stripe

Description – Silver circular medal 36mm diameter. The medal obverse depicts the crowned effigy of the reigning sovereign, surrounded by the royal titles; ‘ELIZABETH II DEI GRATIA REGINA F.D.’ The reverse depicts either the emblem of the Ambulance Services of Scotland or the remainder of the United Kingdom in the centre with the wording ‘FOR EXEMPLARY SERVICE’ around the top. 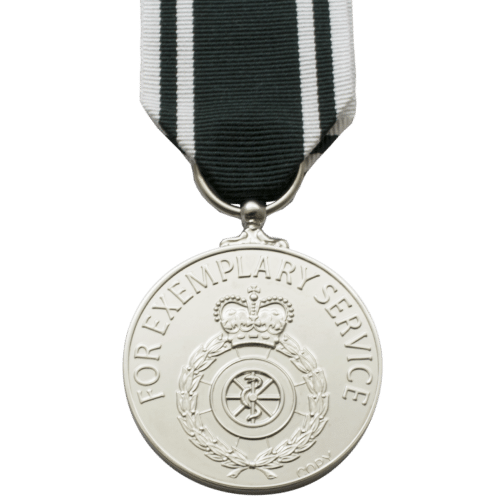