The Air Force Cross (AFC) was first established by King George V on the 3rd June 1918, after the formation of the RAF. It is a military decoration awarded to personnel of the United Kingdom Armed Forces, and formerly also to officers of the other Commonwealth countries, for "an act or acts of valour, courage or devotion to duty whilst flying, though not in active operations against the enemy". It may also be granted to individuals not belonging to the RAF for having rendered distinguished services to aviation in actual flying.

It was originally awarded to Air Force commissioned officers and Warrant Officers, but this was expanded after the Second World War to include Army and Navy aviation officers, and again in 1993 to other ranks after the review of gallantry awards and the discontinuation of the Air Force Medal.

Recipients of the Air Force Cross are entitled to use the post-nominal letters "AFC". A bar is added to the ribbon for holders of the AFC who received a second award. The bar has an eagle in the centre and the year of the award is engraved on the reverse.

The AFC was essentially a non-combat version of the Distinguished Flying Cross.

Awarded for – "... gallantry while flying but not on active operations against the enemy.

Clasps – A bar is added for those awarded further AFCs.

Description – The medal is a silver cross 60 mm high and 54 mm wide, representing aircraft propeller blades, with wings between the arms. The obverse depicts Hermes, mounted on a hawk in flight, bestowing a wreath. At the top of the upper arm is the royal crown, while the other three arms bear the royal cypher of the reigning monarch at the time of issue. For the Second World War DFCs the letters G (top), R (left), VI (bottom), and I (right) and for the Korea DFCs E (top), II (left), R (right), and the bottom blank. The top arm is ensigned by an Imperial Crown.

On the reverse of the award, within a central circle, the Royal Cypher GV, GVI, EIIR are engraved, above the date 1918, the year when the award was instituted. The AFC is issued unnamed.

A bar is awarded for an additional act which would have warranted the AFC. The bar has an eagle in the centre and the year of the award is engraved on the reverse. 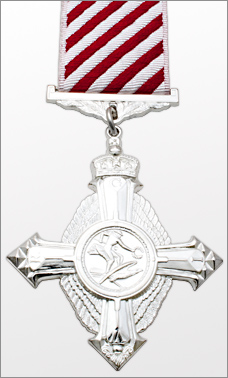