Established in August 17th 1942  the Air Efficiency Award was to be given for ten years’ meritorious service to airmen, airwomen and part-time officers in the Auxiliary and Volunteer Air Forces of the United Kingdom and the Territorial Air Forces and Air Force Reserves of the Commonwealth and Empire services. Further clasps could be awarded upon completion of each additional ten years of qualifying service.

The Air Efficiency Award was unique, being a decoration which could be presented to officers and other ranks alike in recognition of the unique relationship between the officers and men of an aircraft crew. The period of service required to qualify for the Air Efficiency Award was ten years, of which at least five years of actual service had to have been in the Volunteer, or Auxiliary Air Force. Service with the Royal Air Force (RAF) or any other Commonwealth Air Force during the Second World War between September 3rd, 1939 and September 2nd, 1945, was counted treble time. Service, other than in Flying duties in the Air Force Reserve or the Territorial Air Force was normally counted as single time, but when embodied within the Royal Air Force or any Commonwealth Air Force during the Second World War, this was counted as double time.

In the United Kingdom the award was discontinued on 1st April 1999, and replaced by the Volunteer Reserves Service Medal.

Post nominals - Post-nominal letters AE was only approved at some date between 27th October 1964 and 28th October 1982, and only in respect of officer recipients

Clasps / Bar – Further clasps could be awarded upon completion of each additional ten years of qualifying service.

Description – Silver, height 38mm, max width 32mm.  The award is oval in design with a raised rim on each side and suspended from a silver bar in the form of an Eagle in flight looking to the left with its wings outspread. The obverse bears the uncrowned effigy of the reigning monarch, with four versions of this medal being awarded. The reverse of the award is inscribed AIR EFFICIENCY AWARD in three lines. 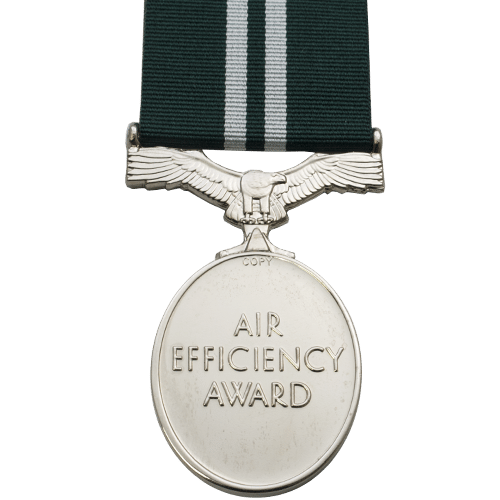