The Air Crew Europe Star was a campaign medal of the British Commonwealth, awarded for service in World War II. Specifically, the medal was awarded to Commonwealth aircrew who participated in operational flights over Europe, from UK bases.

This medal was awarded for operational flying from the UK over Europe, between the period 3rd September 1939 to 5th June 1944 (outbreak of war until the start of the D-Day Normandy Invasion).

The recipient was awarded this star if their service period was terminated by their death or disability due to service. Also the award of a gallantry medal or mention in despatches also produced the award of this medal, regardless of their service duration.

RAF air crew had to complete 2 months service for this medal. However, this 2 months had to come after the service which entitled the person to the 1939-45 Star.

Army personnel qualified for this star if they served on air crew duties for 4 months, and that 2 months of this minimum 4 month period had been operational flying over Europe, with at least one operational sortie.

The possible Atlantic, Aircrew Europe and France & Germany Star combinations are (remembering that you only received the first two earned of these 3 stars)

Due to the different date ranges, you can't have a Aircrew Europe clasp to a France and Germany Star.

Ribbon – the ribbon is light blue with black edges and yellow stripes, representing continuous service by day and night.

Awarded for – Flying over occupied Europe

Description – A six pointed bronze star, in the centre the Royal cipher GRI VI, within a circlet bearing the title “The Air Crew Europe Star”.  A crown is positioned on the circlet at 12 o’clock.

Awarded to those who subsequently became entitled to the Atlantic Star.

Awarded to those who subsequently became entitled to the France and Germany Star. 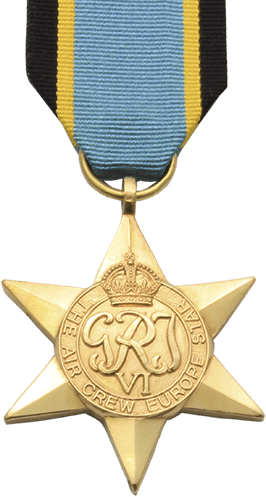