The Star was awarded for the following qualifications and operations:

Navy and Merchant Navy – Any Service at sea in the Mediterranean between 10th June, 1940 and 12th May, 1943, and or service in support of the campaigns in Abyssinia, Somaliland and Eritrea.  Naval service ashore in the same areas as the army would also qualify.  Members of the Merchant Navy who took part in the operations off the coast of Morocco between 8th November, 1942 and 12th May, 1943 would also qualify.

Army – The qualification is the entry into North Africa on the establishment of an operational unit.  Service in Abyssinia, The Somaliland’s, Entitres, Sudan and Malta.

R.A.F – The qualification was to have landed in, or flown over, any of the areas previously mentioned (except West Africa), or territory occupied by the enemy.

Members of the Australian Imperial Force qualified for the Star for Service in Syria from 8th June, 1941, and 11th July, 1941.

Ribbon – It is reputed to have been designed by King George VI. The sand of the desert is represented by pale buff, the Royal Navy (and Merchant Navy), British Army, and Royal Air Force are represented by stripes of dark blue, red, and light blue respectively

Description - The Africa Star is a six–pointed star of yellow copper zinc alloy, with a height of 44mm and a maximum width of 38mm.

Obverse has a central design of the Royal Cypher of King George VI, surmounted by a crown. The cypher is surrounded by a circlet containing the words ‘The Africa Star'.  The reverse is plain, although Stars issued to Australian, Indian and South African personnel have recipient names impressed.

The Africa Star has three clasps, although regulations only allow one clasp to be worn, that being the first for which the recipient qualified.

The insignia descriptions are clasps are of yellow copper zinc alloy and are sewn directly to the face of the medal ribbon. The figure '1', '8' and rosette devices are silver and are worn centrally on the ribbon bar. Only one device may be worn

Awarded for service with the 8th Army between 23rd October 1942, the date of the Battle of El Alamein and the 12th May, 1943. An Arabic numeral '8' is worn on the ribbon in undress to denote this bar. This award is controversial because Eighth Army was created in October 1941 and fought in Africa for a year before the award service requirement.

Awarded for service with the 1st Army for service in Tunis or Algeria between 8th November 1942 and 31st December, 1942, or thereafter between 1st January and 12th May 1943, in any unit under the command of the First Army. A '1' is worn on the ribbon in undress to denote this bar. Some clasps consist of a small plate saying '1st ARMY' across the full width of the ribbon.

Awarded for service with the 18th Army Group Headquarters who did not qualify for either of the numerals between 15th February 1942 and 12th February 1943, or navy and Merchant Navy in shore service, or Royal Air Force service who served under the command of the A.O.C. Western Desert, A.C.N.W. African Forces, A.O.C. Malta, or any others who operated against the Germans or Italians from 23rd October 1942 to 12th May 1943. In undress, a rosette on the ribbon denotes this bar.  The Merchant Navy for service on the North African coast between 23rd October, 1942, and 12th May, 1943, and participation in the landings on the Moroccan Coast between 8th November, 1942 and 12th May, 1943. 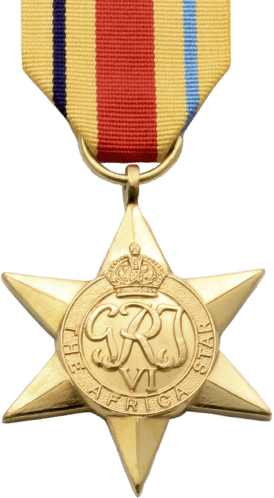