The award of this silver medal was approved by His Majesty the King on 16th November, 1943.  The Africa Service Medal was a South African campaign medal for service in World War Two and was awarded in addition to the British stars and medals issued for the war. The medal was granted to members of the Union Defence Forces, the South African Police, and the South African Railways Police.

The qualifications for the Africa Service Medal were:

The following also qualified for the Africa Service Medal:

To qualify for the Africa Service Medal members of those above must have volunteered for war service outside South Africa, and have served continuously for thirty days, or part-time for a total of eighteen hours, between 6th, September, 1939 and 2nd, September, 1945.

There are two versions of this award, a plain one for enlisted men and a silver version for officers.

Awarded for – Campaign Services, Personnel who served continuously for thirty days, or part-time for a total of eighteen hours, between 6th, September, 1939 and 2nd, September, 1945.

Designer – Suggested by the Prime Minister and Minister of Defence of the Union of South Africa, and then sketched by a member of the South African Mint.

A bronze King Protea flower emblem was used to represent the King’s Commendation and could be worn on the ribbon of the Africa Service Medal. It could be awarded for valuable services during WWII and was the equivalent of a Mention in Despatches. 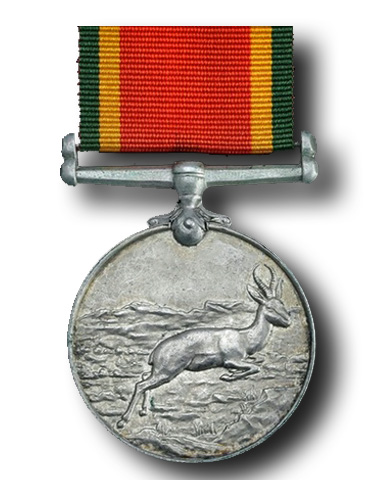