The 1914 Star, also known as the Mons Star, was a campaign medal of the British Empire, for service in World War One.

This Bronze Star was authorised in April, 1917, to be awarded to those who served in France or Belgium on the strength of a unit, or service in either of those countries between 5th August and midnight on 22nd/23rd November 1914.  The former date is the day after Britain's declaration of war against the Central Powers, and the closing date marks the end of the First Battle of Ypres.

Recipients were officers and men of the pre-war British Army, specifically the British Expeditionary Force (B.E.F or the Old Contemptibles), who landed in France soon after the outbreak of the War and who took part in the Retreat from Mons (hence the nickname 'Mons Star'). 365,622 were awarded in total.  Recipients of this medal also received the British War Medal and Victory Medal. These three medals were sometimes irreverently referred to as Pip, Squeak and Wilfred.

In October, 1919, the King graciously pleased to approved and sanctioned the award of the bar to this star to all those who had been ‘under fire’ in France or Belgium during, or between the above dates.

The Bar is of bronze and bears on it “5th Aug – 22nd Nov. 1914” There are small holes on each corner enabling it to be sewn on to the ribbon.  Those entitled to the bar wear a small silver rose in the centre of the ribbon when the medal is not worn.

A very similar medal, the 1914-15 Star, was also issued, but no person could receive both awards.

Ribbon – 32mm wide. Reading from the left to right as seen on the wearer, the colours are red, white and blue shaded and watered. The Same as the 1914-15 Star.

Ribbon – 32mm wide. Reading from the left to right as seen on the wearer, the colours are red, white and blue shaded and watered. The same as the 1914-15 Star.

Naming – The recipient’s number, rank, name and regiment are stamped in block capitals on the reverse in three lines.

The medal is a four pointed star of bright bronze, unsigned with a crown, with a height of 50mm, and a maximum width of 45mm. Obverse has two crossed glade (swords) with blades upwards and a wreath of oak leaves, with the Royal Cypher of King George V at foot and central ‘S’-shaped scroll inscribed AUG 1914 NOV”.  The reverse is plain with the recipient’s number, rank and name.

5th Aug. – 22nd Nov. 1914   Often referred to as Clasp and Roses. Instituted in 1919 (Army Order Number 361 published 16 October 1919) and awarded to those who had operated within range of enemy mobile artillery during the above period. When the ribbon bar was worn alone, recipients of the clasp to the medal wore a small silver rosette on the ribbon bar. 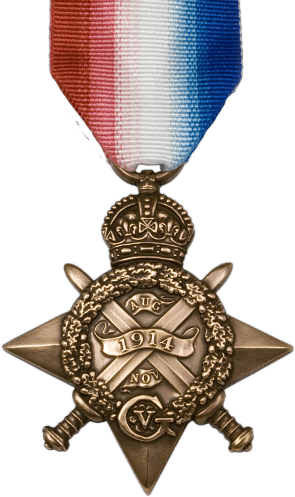