The 1914/15 Star was a campaign medal of the British Empire, for service in World War one.

This Star is identical with the 1914 Star in every respect except that the centre scroll bears the dates “1914- 15” and the two small scrolls bearing “Aug” and “Nov” are omitted.

The 1914/15 Star was approved in 1918, for issue to officers and men of British Imperial Forces who saw service in any theatre of war against the Central Powers between 5th August, 1914, and 31st December, 1915, except those eligible of the 1914 Star.

Recipients of this medal also received the British War Medal and Victory Medal - it was never awarded singly. These three medals were sometimes irreverently referred to as Pip, Squeak and Wilfred with Pip representing either this medal or the 1914 Star, only one of which could be awarded to a soldier; Squeak represented the British War Medal; and Wilfred represented the Victory Medal.

Ribbon – 32mm wide. Reading from the left to right as seen on the wearer, the colours are red, white and blue shaded and watered. The Same as the 1914 Star.

Ribbon – 32mm wide. Reading from the left to right as seen on the wearer, the colours are red, white and blue shaded and watered. The Same as the 1914 Star.

Naming – The recipient’s number, rank, name and regiment are stamped in block capitals on the reverse in three lines.

The medal is a four pointed star of bright bronze, unsigned with a crown, with a height of 50mm, and a maximum width of 45mm. Obverse has two crossed glade (swords) with blades upwards and a wreath of oak leaves, with the Royal Cypher of King George V at foot and an overlaying central scroll inscribed “1914-15”.  The reverse is plain with the recipient’s number, rank and name. 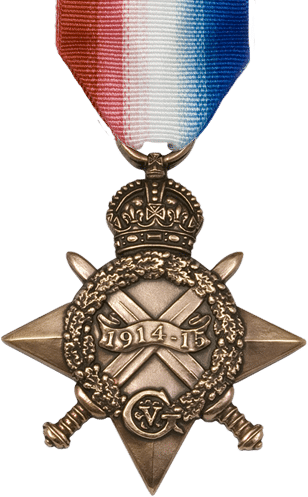