Finding the Commonwealth soldier in your family tree

When someone declares war on Britain, they’re not just taking on a tiny island. Traditionally, when Britain has stood on a battlefield, her Commonwealth forces have stood up right beside her; some because they are obliged to be there, but others, in countries with no policy of conscription, out of loyalty to the United Kingdom and a joint history. In World War One Commonwealth soldiers from Canada, New Zealand, Australia, Newfoundland, South Africa, Undivided India and other colonies made up just over 30% of the United Kingdom’s entire fighting force and 20% of the men killed in service according to Geoff Bridger’s ‘The Great War Handbook’. In the Second World War those numbers were just over 40% and 35% respectively. These nations declared war straight after the UK, and fought alongside the British soldiers with courage and honour, as well as providing arms, materials and political support. It is safe to say that they have done their bit over the years, and that the soldiers all deserve to be remembered and celebrated for their service. 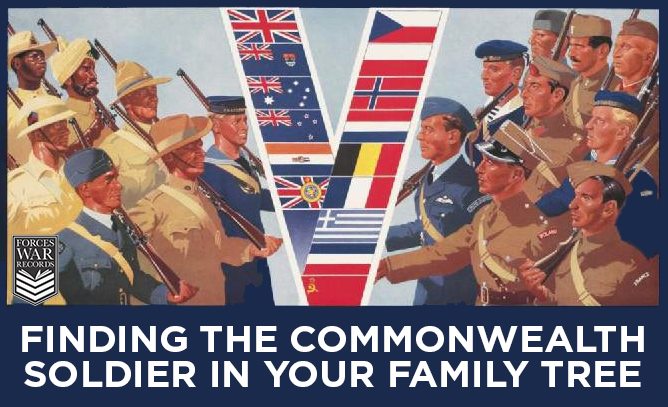 The first rule of thumb for finding Commonwealth ancestors is to never make assumption about where their records will be. Many of the men drafted in to help were actually British-born citizens or of British origin, and others fought in units within the British forces (for example, No. 6 (Royal Canadian Air Force) Group served as part of Bomber Command in World War Two, so their records can be found in the same location as the rest of the RAF Bomber Command files). If you’re not sure whether your ancestor served as part of the forces of his or her home country, or as part of the British forces, it pays to check through Britain’s own records before looking further afield. If your ancestor was a British citizen they might have settled here after World War One and drawn a pension, in which case their details might be included in the WO 364 collection found at the National Archives in Kew, ‘War Office: Soldiers’ Documents from Pension Claims, First World War’.

Confusingly, some families whose relatives were British through and through might want to look in the National Archives of another country. Conscription in Britain during the Great War did not start until 1916, which meant that for two years men were free to volunteer to fight, or not, as they saw fit. Many realised that certain Commonwealth countries offered better benefits and salaries to members of the Armed Forces than Britain did, so they decided to sign up to fight for those countries, knowing that this would allow them to support the war effort on their own terms. If you’ve heard rumours that a relative served for another country, it might pay to investigate them.

Canadians played a massive part in World War One, and are most lauded for their bravery at Vimy Ridge as part of the Battle of Arras. Mark Adkin’s ‘Western Front Companion’ describes how, on the morning of 9th April 1917, four divisions of the First Army Canadian Corps, backed by one British division and led by Lieutenant General Sir Julian Byng, stormed the key observation point on the Plains of Douai. Their aim, in taking over the ridge, was to protect the southern flank of the Arras advance from enemy fire. It took just two hours for all but one division, which was briefly held up by machine gun fire, to reach their goals. By the end of the battle they had sustained just over 10,000 casualties and taken 4,000 prisoners from the Sixth Army I Bavarian Corps. In the process, they earned 4 Victoria Crosses; by the end of World War One, Canadians would have earned 69 VCs in all.

ANZAC troops will always be associated particularly with the ill-fated Great War Gallipoli Campaign, which, although deemed a failure, saw the troops fight heroically in a desperate situation and cemented the great military identities of both Australia and New Zealand. The 150,000 men of the Second Expeditionary Force went up against a numerically superior, well organised force of Turkish soldiers on terrain that strongly favoured the defenders, and put up a truly epic fight before they were forced to retreat. In World War Two the ANZACs lent their services in the fight against the Japanese, and many landed up in the dreaded Far East Prisoner of War camps for their trouble.

Australians will find that it’s well worth visiting the Australian War Memorial in Canberra, a monument-cum-museum-cum-archive, which holds, among other things, a Roll of Honour listing all those who died in both World Wars, a list of WWI Red Cross Files and WWII POWs, and a Nominal Roll of all who went overseas with the AIF in WWI. First World War Service Records are provided for free by the government and digitised for online viewing. Australian army records can be seen here: http://www.naa.gov.au/collection/explore/defence/service-records/army-wwi.aspx and New Zealand army records here: http://www.nzhistory.net.nz/war/researching-first-world-war-soldiers, while you can look up your Australian naval ancestor at: http://www.naa.gov.au/collection/explore/defence/service-records/navy.aspx. Second World War Service Records for all three Australian Armed Forces can be found via this link: http://www.naa.gov.au/collection/explore/defence/service-records. Meanwhile, as with British World War Two records, a special written application form must be put in to find out more about New Zealand troops: http://www.nzdf.mil.nz/personnel-records/nzdf-archives/accessing-military-service-records.htm.

In the Great War South African troops fought especially hard at Delville Wood, in the Somme, despite many not being too pleased about siding with Britain, their former Boer War enemy. In World War Two they played a key role in the Allied Air Force, some as part of the SAAF, others with the RAF. They also took part in the Allied Operations in East and North Africa, with South Africans aiding the liberation of Madagascar and rolling up their sleeves at El Alamein. Many were also taken prisoner in the Fall of Tobruk. Unfortunately there are very few World War One records available, since there was no official standing army until after the conflict, but for both World Wars your best bet is to contact the Documentation Centre of the South African National Defence Force: http://libguides.sun.ac.za/content.php?pid=331503&sid=4159414. You can also find more information about war graves here: http://www.southafricawargraves.org/research.htm.

Many Indian Divisions served with skill and honour in the Great War, both on the Western Front and in Egypt and Mesopotamia, despite the fact that there had been a great push for independence shortly before the conflict began. Many Indian troops endured incredible hardships in the trenches of Neuve Chapelle without complaint. A great deal of money also poured into the war coffers from Indian princes. In the Second World War India again went above and beyond for Britain in the fight for Burma, Italy and North and East Africa. Of the 19th Hyderabad Regiment, the Kumaon Rifles Battalion took part in the Anglo-Soviet invasion of Iran in 1941, while the 4th Battalion took part in defence of Malaya and fought brilliantly in the fighting retreat to Singapore, being well trained in Jungle warfare. Under 12th Indian Brigade, they were one of the first units to combat the Japanese landings on 7th December 1941, and were practically annihilated during the Battle of Slim River. The survivors fought hard in the Battle of Singapore, but were forced to surrender. The British Library has quite a bit of information on the Indian Contribution to both World Wars, including some very good oral histories: http://www.bl.uk/learning/histcitizen/asians/worldwars/theworldwars.html. It might also be worth contacting the Families in British India Society: http://search.fibis.org/frontis/bin/aps_browse_sources.php?mode=list_sources&source_class=213.

Apart from Service Records, you might try looking for an Operational Record, a record unique to your ancestor’s unit, such as an official War Diary. Other information could be available in the form of Medal Rolls or casualty records. It is easiest to find these records by visiting the archives of the various nations or searching online, otherwise it might be possible to pay a small fee and organise a staff member to search for you, or else obtain names of locally based researchers who will do the work for you. Don’t forget that promotions and Gallantry Medals for the Commonwealth and Imperial Forces were announced in the London Gazette alongside the equivalent information for the British Forces, so their archive is worth delving through: https://www.thegazette.co.uk/awards-and-accreditation. The Commonwealth War Graves Commission also holds records of the dead for each nation: http://www.cwgc.org/find-war-dead.aspx, and Forces War Records holds both collections.

Enter your email address to follow this blog and receive notifications of new posts by email.
Join 9672 other followers