It is Christmas morning.  As I gaze over the parapet on the drab landscape before me, every feature, every rise or fall in the ground, every knoll, every hideous skeleton of shattered building, almost every tree, has its story, so consecrated for ever to the memory of the English race is the Aubers Ridge opposite-an inconsiderable, scarcely noticeable rise in the ground. So are the skeleton tress, the hedgerows and fields that fringe its summit, that climb its slope. So are the bright red and dark red roof of buildings that cluster half-way up the slope and the tall factory chimney in the midst-that of Aubers itself.

In the foreground is a village absolutely shattered.  It is scarcely possible to see the brown roofs, the stack walls, and vari-coloured ruins amid the trees. Then comes the church-a ghostly shell, dominating the flat scene. And behind the trees is a row of tall elms and poplars, looking monstrous in the mist, these marking the line of the road. Immediately in front of them is a big farmstead with a courtyard and a square little home-field – an untidy heap of red brick amid four naked walls.

Between the irregular lines of the trenches, with their jumbled white sandbags and untidy earth parapets, is a stream marked by a line of twisted brown willows bent to every conceivable grotesque shape. The stream runs down the middle of No Man’s Land, which is itself a place of coarse grasses hiding little moulding heaps of grey and khaki-the slain of Festubert, of Neuve Chapelle and the late September (heaps of old clothes or fallen scarecrows, they look like), of knobs and unexpected pits, of earthy holes and water logged ditches. And here our men meet the Germans.

So soon as it grows light this morning we start peeping at each other over the top of the parapet….calling across to each other. And presently, at about 7.50am a German stands up openly on the parapet and waves his arms.  He is followed by two in field-grey overcoats and pill-box caps. Then they come out all down the line, stand up on the parapet, wave, shout, and finally swarm forth from their trenches on either side

And so the grey and khaki figures surge towards each other as one man. The movement has started on the right. It spreads like contagion. Only we officers, the sentries, and a few non-commissioned officers remain in our trench. The men meet at the willow lined stream; they even cross it and mingle together in a haphazard throng. They talk and gesticulate, and shake hands over and over again. They pat each other on the shoulder and laugh like schoolboys, and leap across the little stream for fun. And when an Englishman falls in and a German solider helps him out there is a shout of laughter that echoes back to the trenches. 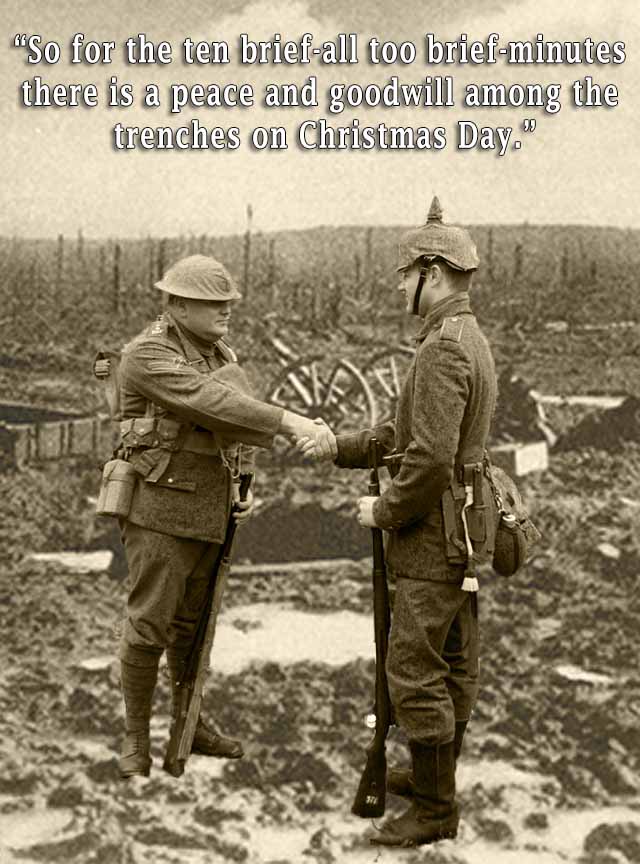 The Germans exchange cigars and pieces of sausage, and sauerkraut and concentrated coffee for cigarettes and bully beef and ration biscuits and tobacco. They express mutual admiration by pointing and sins. It is our leather waistcoats and trench-coats that attract their attention; it is their trench overalls, made of course canvas, that attract ours. We shout “Hullo, Fritz” “Good morning, Fritz!” “Merry Christmas!” “Happy Christmas!” “How’s your father?” “Come over and call” “Come and have breakfast,” and the like, amid roars of laughter. Even confidences are exchanged in broken English.

“When’s the war going to end?”

“After the Spring offensive.”

“What sort of trenches have you?”

“Rotten! Knee deep in mud and water. Not fit for pigs.”

And the information is even vouchsafed that our Christmas Eve bombardment had caused the Germans a lot of casualties.

So for the ten brief-all too brief-minutes there is a peace and goodwill among the trenches on Christmas Day.

Then from the trenches of the Ninety-fifth Bavarian Reserve Infantry Regiment two officers in black accoutrements and shiny field-boots come out, wishing to take photographs of our Tommies, and offering them cigars. The request is refused, and presently they say: “You will have five minutes to get back to your trenches before our artillery will open fire.”

And it does. And two or three men are wounded almost at once. But for twenty-four hours, which included much of Christmas Day 1915, not a shot is fired on either side. A common brotherhood of suffering-or is it an act of God, or just human curiosity? has united Englishmen and Bavarian in fraternity on the battlefield the grey Christmas morning which no one on either side who has taken part in this quaint scene will ever forget.

Find out more about your ancestors...