A self-build project in Worle, Weston-super-Mare, set up by the charity Community Self Build Agency, due to be completed summer 2017, has spaces for veterans. Ex-serviceman Michael Morris tells how he got involved in building his own home 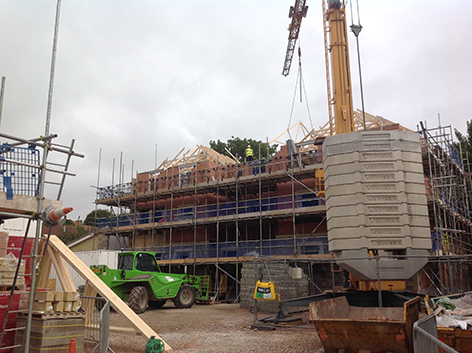 “I'm ex-Royal Navy, I joined in August 1967, and unfortunately in July 1968 I went through a glass partition door and severed all of the tendons, and the artery of my right wrist- nearly losing my right arm. This put me out of action for over nine months which meant I had do part of my training again. After initial training I went to HMS Dryad to train as a Radar Operator. My first ship after training was HMS Plymouth, an anti-submarine Frigate number D126. We went mostly to the east covering the Med, South Africa, Mombasa, Singapore, Hong Kong and down to Australia… a fantastic trip and a whole new story! I also served on land at HMS Osprey at Portland. Then, on to HMS Kent, a destroyer. I finished up at HMS Nelson in Portsmouth when, in 1974, I hurt my wrist again, so that was it and I was out in 1974. 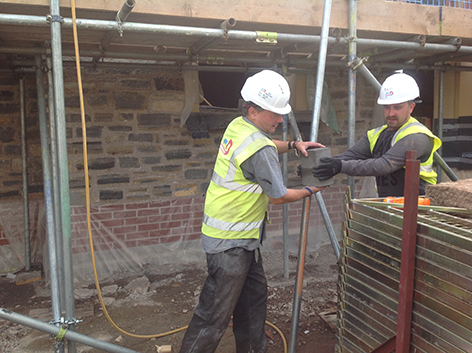 “As I'd been on the housing list for many years, one day I, for a reason I don't remember ended up talking with Kay Topazio of Knightstone Housing and I just mentioned I was ex-Forces. Then out of the blue, around May 2015, I had a call from John Gillespie, director of the charity Community Self Build Agency (CSBA). My wife Angela and I went to a meeting at Knightstone where we met Dave Summerhill (Project Head) and two other self-builders. Pretty soon we were on-board! However, we then had to wait for the old Knightstone offices to be demolished, and any dangerous waste to be disposed of. After that, we were introduced to ex-Major Ken Hames, SAS, who was to be our project leader on site. Most of what I do is guided by Ken Hames, and I work alongside him a lot. Once I was onsite it was introduction time again… the strength behind the CSBA is a lovely lady, Stella Clarke CBE, someone you don't say “no” to, she’s a fantastic negotiator, full of life and always on the go, the charity couldn't do without her. I also have to mention Terry Gordon, who, for someone in the building trade is a real gentle giant; he dishes out the jobs for the boys/girls onsite. Terry and the site manager Gareth are here to make sure we are kept safe and that we always wear the correct health & safety gear. Meeting Terry has enriched my life, I feel good calling him a friend, and I’m sure I speak for all of us on site. He's got a wicked sense of humour, and he just looks after us!

“It wasn't until May this year that the three of us went on site for the first time. There are two blocks, 'A' at the front and 'B' at the back. 'A' is a block of four one-bed flats and 'B' has four two bed flats at the rear and six one-bed flats at the front. After only four months, the roof is almost on block 'B'. The front has bay windows surrounded with Bath stone, and it looks superb. There haven't been any problems, it's all gone to plan and the project is on time. We have a canteen where breakfast is cooked every day for us, one person’s wife cooks for three or four days and my wife comes over one or two days, as volunteer work. By the end of September we should be watertight, and then other trades like electricians, plumbers, carpenters and so on will come in. Some will render the outside and others will plaster the inside. 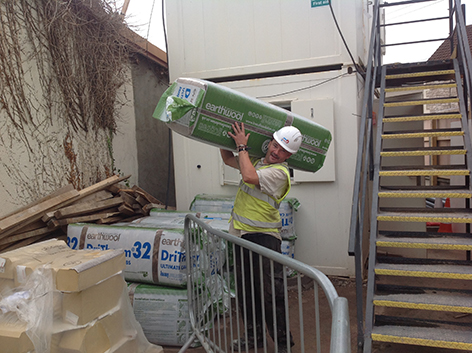 “Because I'm disabled, and also a geek, I provide IT support to the build, and with that do a lot of admin as well. I have also been tasked with creating a portfolio for each person; this will contain their CV (which I’ve written), photographic evidence (I've taken over 800 photos so far), written evidence and any qualification/tickets they have attained. I'm also there to teach them computer skills, if they wish. I'm there to support them, solve any problems if I can and basically help them with whatever they need. The build will be completed around June/July 2017 and we just can't wait to move in. These homes are high spec, and what’s lovely is that, due to a single poppy growing on the site, we've named our developments 'Poppy Court', plus, we've kept the seeds to re-plant so that everyone can have one. The local council has accepted the name as well.

“The selection process is simple: be ex-Armed Forces no matter how long you have served, have a willingness to learn a skill, and you also need to put something in, as you’re getting something out. You may want to learn to be a bricklayer, plumber, electrician or carpenter, and will need to attend college. Each person has different needs so candidates will all be suited to various tasks, even if it’s just sweeping up; it all helps.”

The CSBA is moving into other areas all over the UK, building more homes for veterans. If you’re looking for a self-build home, or you want to find out more, get in touch.