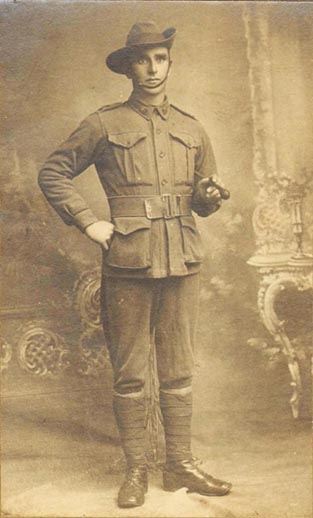 There is a symbol, we love and adore it,
You see it daily wherever you go.
Long years have passed since our fathers once wore it,
What is the symbol that we should all know?

Don't you thrill as young Bill passes by?
Don't you beam at the gleam in his eye?
Head erect, shoulders square, tunic spic and span,
Ev'ry inch a soldier and ev'ry inch a man.

As they swing down the street, aren't they grand?
Three abreast to the beat of the band,
But what do we remember when the boys have passed along?
Marching by so brave and strong.

The brown slouch hat was first adopted into Australian military service in 1885 when it was chosen for the newly-formed Victorian Mounted Rifles; its well known high-domed crown and narrow brim, turned up on the left side, so that a rifle or one fitted with a bayonet would not interfere with the head gear, soon became symbolic of the Australian services. It was first worn overseas in the South African War.

When the Defence Act of 1903 combined the colonial defence forces into a single Australian army, the slouch hat became part of the uniform, and an array of embellishments was introduced. The hat featured a lower and indented crown. The turned-up side was held in position by means of a hook and eye fastener, and badges were backed with a distinctive cloth rosette in the corps or regimental colour. A stripe of the same colour was later added to the new seven-fold puggaree. The chinstrap, reduced in width, was adjusted by means of a sliding buckle.

Further standardisation and changes to embellishments occurred from time to time, with the raising of the 1st AIF in 1914, the reorganisation in 1922 of the Australian Military Forces and the introduction of the voluntary militia force in 1930, 1939 and in postwar years.

A shortage of cork helmets led to the widespread use of the slouch hat amongst British Empire forces during the Second Boer War, where it was used by units such as theCity Imperial Volunteers (CIV), Imperial Yeomanry, and King Edward's Horse. After the war, however, many armies rejected the once-popular headwear (as the British Army did in 1905), although it came back into fashion briefly during World War 2 during the Burma Campaign and amongst troops serving in India and Southeast Asia at this time.

Today, similar felt hats are worn by the all Australian services, but only the Australian Army, to which it remains a symbol of distinction and pride, continues to wear the khaki felt hat with its side turned up.