Remembrance Day – in the beginning 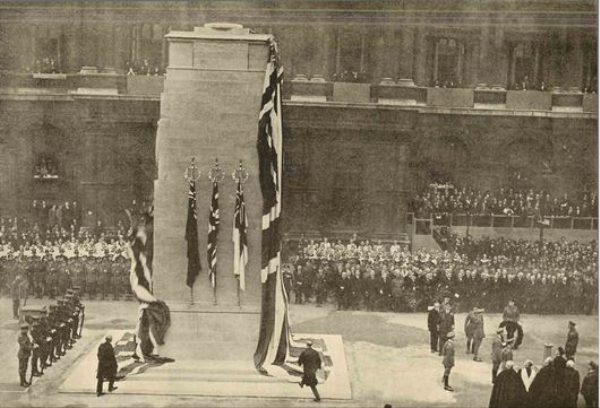 Going right back to the beginning, commemoration of the First World War actually began long before the shooting stopped, when family and friends began to acknowledge the death (or disappearance) of the men who had been sent to the Front Lines. From 1916 street shrines started to appear in London, and the idea for creating some form of event to mark the loss quickly took hold with the nation. The biggest of these early events took place in Hyde Park, and attracted hundreds of thousands of visitors. Soon a more permanent memorial was looked for, long before the war ended. Prime Minister David Lloyd George asked architect Edwin Lutyens to design a structure for a ‘Peace Day’ parade in London; his initial design was sketched on the back of a napkin, and from that, a temporary version of the Cenotaph was erected. On the first ever Remembrance Day, nearly 15,000 troops took part; however, many veterans refused to participate in what they saw as a 'militaristic celebration'.

Across the country 52 villages were named ‘thankful villages’, because no soldiers from those areas had died whilst fighting. The number of lucky towns was pitifully small, since ‘the war to end all wars’ claimed such a heavy toll. The Armistice was signed at 5am in a railway carriage in the Forest of Compiegne, France, on November 11 1918. Six hours later, at 11am, the war officially ended, and for the first time since 1914, London’s Big Ben chimed and ecstatic crowds flooded the streets. “You are well entitled to rejoice”, said Prime Minister David Lloyd-George. “The people of this country and our allies, the people of the Dominions and of India, have won a great victory for humanity.” But the war didn’t officially end in Britain until June 1919, when the Treaty of Versailles was signed, and so Remembrance Day as we recognise it today actually fell in November 1919.

So what was Remembrance Day like in the early years? There were certainly church services, much the same as today, and the Forces’ chaplain spoke at the Cenotaph. It was also a day not just for remembrance, but for looking forward, and throughout the country meetings were held, attended by thousands, in support of the League of Nations. Local war memorials were erected throughout the 1920s. At annual ceremonies the names of the dead were read out loud, and so the awful silence was accompanied by a vocal acknowledgement.

In a letter published in the London Evening News on the 8th of May 1919, Australian journalist Edward George Honey proposed a respectful silence to remember those who had given their lives in the Great War. This suggestion was brought to the attention of King George V, and on the 7th of November 1919, four days before the first anniversary of Armistice Day (as it was originally named), King George V announced that a two minute silence would be observed, and thus began Remembrance Day as we know it today: "All locomotion should cease, so that, in perfect stillness, the thoughts of everyone may be concentrated on reverent remembrance of the glorious dead." During the two minute silence everyday life stood still for the first time, in what The Times described as “a great awful silence”. There must have been a degree of confusion about how best to honour the silence, as no specific instructions had been given about where people should observe it. Generally it was assumed that everyone would simply pause at what they were doing, however most chose to go outdoors to stand silently in a public place to honour those lost.

In November 1920, to honour servicemen with no named grave, the ‘Unknown Warrior’ was buried in Westminster Abbey. It was hoped that this ceremony would provide an emotional or spiritual relief to survivors. The tomb contained the body of an anonymous, ordinary serviceman, who had been picked at random and laid to rest in the Abbey in the morning. By that afternoon tens of thousands of people had walked past the grave, and over a million people visited it in its first week.

From 1921 the poppy campaign was born. Symbolising the poppy fields in Flanders, artificial poppies were sold to support the Earl Haig Fund for ex-servicemen. The association between commemorating war dead and poppies arises from the famous opening lines of Canadian Army officer John McCrae's poem, ‘In Flanders Fields’, which begins: "In Flanders fields the poppies blow; Between the crosses, row on row." Originally it was former soldiers who made the poppies, which provided some employment for them, and the profits went to support ex-servicemen in need.

Ironically, perhaps, some of those who can still remember living through the horror of times of war for Britain still choose not to wear a poppy; refusing to wear what they feel has become a symbol that advocates war. They choose instead to remember privately those comrades, relatives and friends who lost their lives in conflict.

Today, as I rode by,

I saw the brown leaves dropping from their tree

In a still afternoon,

When no wind whirled them whistling to the sky,

For thinking of a gallant multitude

Which now all withering lay,

Slain by no wind of age or pestilence,

But in their beauty strewed

Written by Margaret Postgate Cole (1893–1980) in November 1915, about World War One, the poem reflects the emotive mood that must have been felt on this first momentous Remembrance Day.