One hundred years ago, in 1914, 25 men were awarded the Victoria Cross. The deeds of two of them, Second-Lieutenant James Leach and Sergeant John Hogan of the 2nd Battalion, Manchester Regiment, are recorded in ‘’Deeds that Thrill the Empire, Volume V” in our Historic Documents Library.

In the third week of October 1914 the Fifth Infantry Division, including the 14th Brigade to which 2nd Manchesters belonged, were fighting at Festubert in the Battle of La Bassée as part of the ‘Race to the Sea’. The Germans launched a fierce attack on 14th Division, of which the Manchesters bore the brunt, on October 28th. Second-Lieutenant James Leach from North Shields in Northumberland, together with 34 of his men, was occupying an advance trench when the Battalion was attacked by 200-300 of the enemy. The British soldiers fought bravely, and managed to halt around half of the attackers, but were eventually overrun and forced to retreat to a support trench. 12 men had been lost in the fighting.

Since the position was an important one Lieutenant Leach was determined to recover it, and two counter-attacks were attempted with no joy. Undeterred, the 20-year-old waited until dark fell, then crept to see what was going on in the trench, which had four traverses. At 11 O’Clock he summoned Sergeant Hogan of Oldham, Lancashire, and asked for 10 more volunteers to help them launch a surprise attack. The dozen crawled along a communication trench to reach the advance trench, and took the Germans completely unawares. They hit the men with their bayonets, and drove them into the next traverse.

The Lieutenant and Sergeant now advanced alone, and soon reached the point where the trench turned sharply at right angles. Leach had a revolver, which he pulled out and fired around the corner without exposing himself to enemy fire. The Germans had only rifles, so although they returned the fire they were unable to aim accurately without stepping around the corner themselves. Hogan, meanwhile, kept a sharp lookout over the parapet to protect against sneak retaliations from above or to the rear.

The Germans had to retreat around the next corner into the neighbouring traverse to protect themselves from the revolver fire. The two British soldiers duly advanced, and again Leach fired around the corner, this time holding the revolver in his left hand. Once more the Germans tried shooting and even hand-to-hand combat, but to no avail. They were again forced around the next corner, into the fourth traverse, which meant that they were now effectively cornered in a cul-de-sac. Each time the Germans retreated, Hogan raised his cap over the parapets on the end of his revolver, to let the rest of the Battalion know how far they’d got so that they wouldn’t accidentally fire at their own men.

The Germans had nowhere to go. As the two soldiers advanced towards the final corner, and English voice called out, “Don’t shoot, sir!” It was one of the Battalion’s own men, taken prisoner in the morning’s battle, and he had been sent to indicate that the enemy wished to surrender. On rounding the corner, the officers found the German officer and 14 of his men on their hands and knees, hands in the air, plaintively calling, “Mercy!” They were told to drop their equipment and run into the British main trench, which they did swiftly, fearful of being picked off by their own side while they were exposed. It now transpired that two more of the British men lost that morning had also been taken prisoner, and all three captured soldiers had been promised a “good time” when they were sent to Berlin as prisoners by the German officer, who spoke some English.

Second-Lieutenant James Leach and Sergeant James Hogan had killed eight Germans and wounded two in the advance, and in all they had taken 16 prisoners. They had also recovered an important advance trench, and risked their lives at the call of duty. They were duly awarded the Victoria Cross.

Here is the full list of men who received this award, living or posthumously, in 1914: 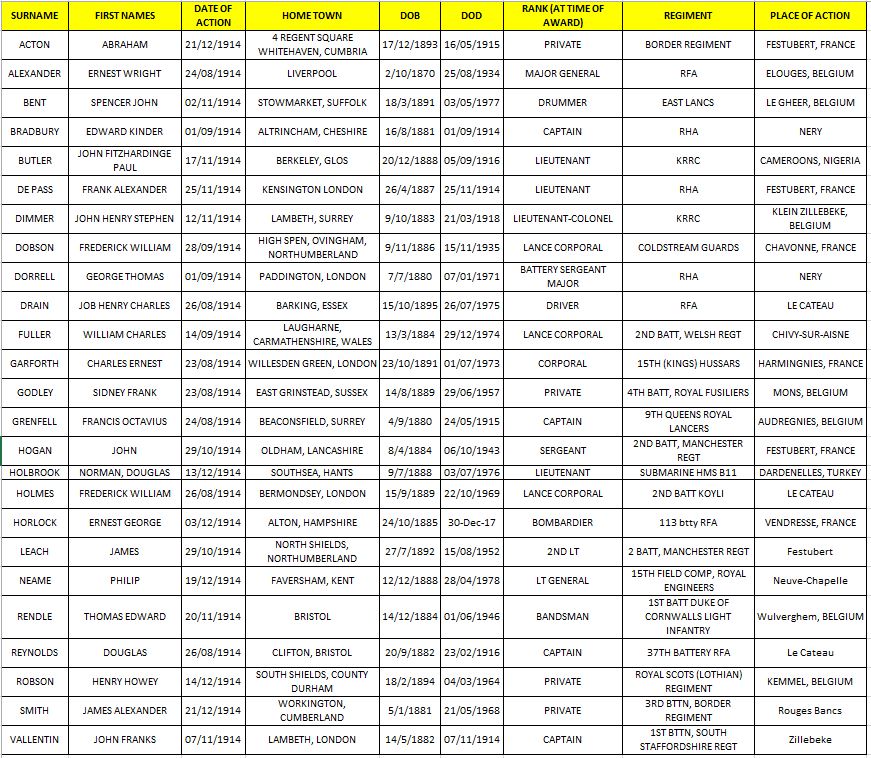