While out on a lunch break today I passed on old charity shop in town and something caught my eye at a bargain price.  It happened to be a Memorial Plaque (AKA Death Penny) that was issued after the First World War to the next-of-kin of all British and Empire service personnel who were killed as a result of the war.

It was purchased for the very low sum of £10 and belonged to the family ‘Walter Ernest England’, Upon looking though Forces War Records Database we found there was a total of two fallen soldiers it could be: 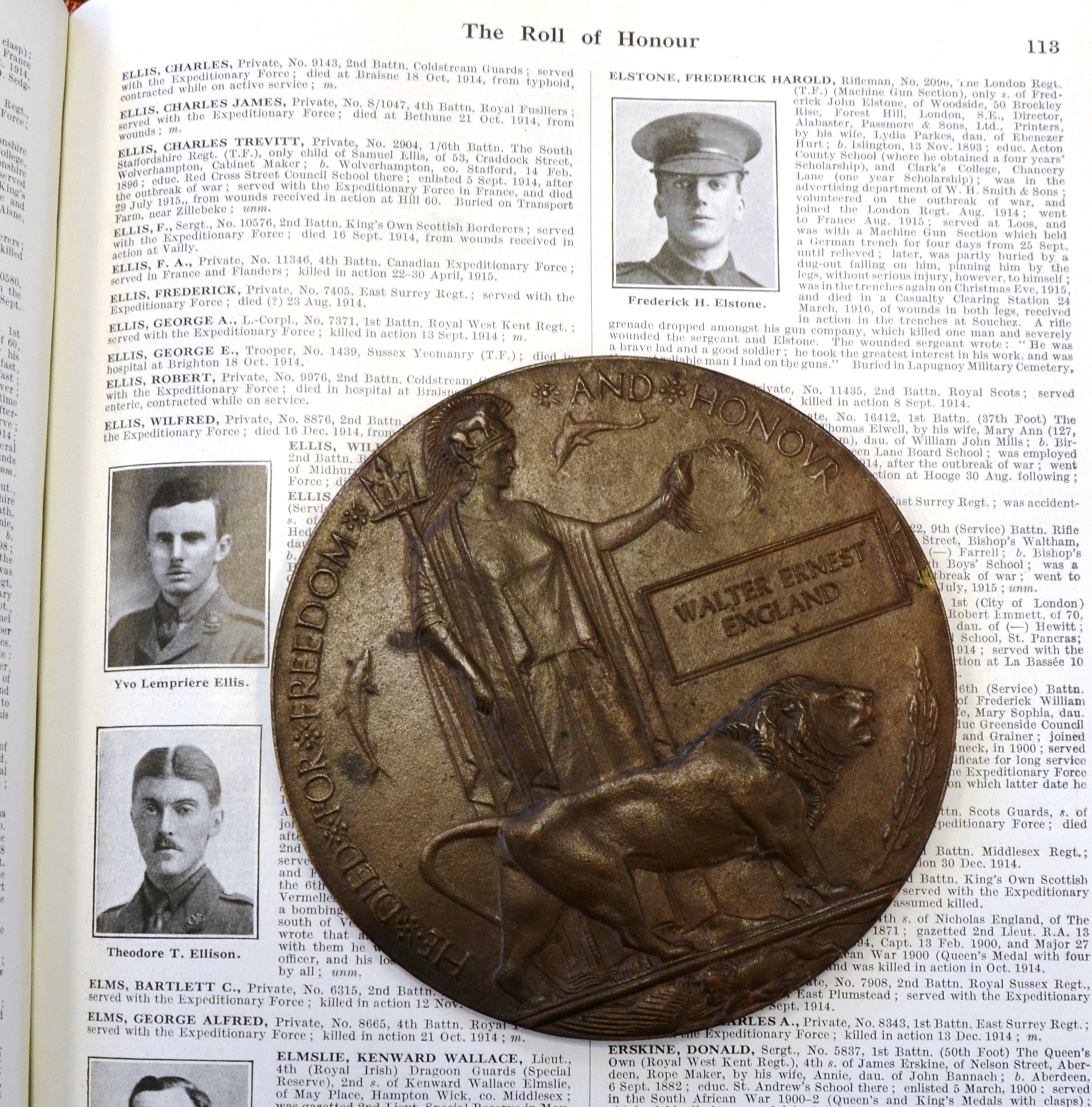 The Memorial Plaque was made from Bronze and hence it was popularly known as the “Dead Man’s Penny” among front-line troops, also becoming widely known as, the “Death Penny”, “Death Plaque” or “Widow's Penny”.

The first a family would know of the death of family member was the arrival of a telegram from the War Office.  This would be followed by the World War One Death Plaque and any medals the serviceman would have earned serving his country.

The government announced a competition to design a suitable plaque with prize money of £250.  There were over 800 entries from across the world, even including submission’s from troops on the front-line.  The winner of the public competition was Mr E. Carter Preston of Liverpool.

The winning design was a 12 centimetre disk cast in bronze gunmetal, which included an image of Britannia and a lion, two dolphins that represented Great Britain's sea power and the emblem of Imperial Germany's eagle being torn to pieces by another lion. Britannia is holding an oak spray with leaves and acorns. Beneath this was a rectangular tablet where the deceased name was cast into the plaque. No rank was given as it was intended to show equality in their sacrifice. On the outer edge of the disk it bears the inscription, 'He died for freedom and honour'.  The memorial plaque was posted to the next of kin protected by a firm cardboard purpose made folder, which was then placed in a white HMSO envelope.

The Death Memorial plaque would be accompanied by a Memorial Scroll, a letter from Buckingham Palace and sometimes a letter from the serviceman’s commanding officer. They would not usually arrive as a single package, but as a series of separate mailings.

The scroll would read in old English script:

'He whom this scroll commemorates was numbered among those who, at the call of King and Country, left all that was dear to them, endured hardness, faced danger, and finally passed out of sight of men by the path of duty and self-sacrifice, giving up their own lives that others may live in freedom'.

Let those who come after see to it that his name be not forgotten.'

Production of the plaques and scrolls, which was supposed to be financed by German reparation money, began in 1919 with approximately 1,150,000 issued. They commemorated those who fell between 4th August, 1914 and 10th January, 1920 for home, Western Europe and the Dominions whilst the final date for the other theatres of war or for those died of attributable causes was 30th April 1920.

It has been estimated that approximately 1,150,000 memorial plaque have been produced, of those 600 were to women.

Enter your email address to follow this blog and receive notifications of new posts by email.
Join 9676 other followers