Raking up the past: Dornier salvage operation reveals an old community secret

September 23, 2013
By Forces War Records
Leave a comment
News, WWII
Share
Share on Facebook
Tweet
Post to Tumblr
Pin it
Submit to Reddit
Share on LinkedIn
Publish on WordPress
Send via Email
Blogger: GemSen In July 1944 two World War II German Dornier bombers collided over the Pyrenees Mountains while trying to make it back to their base in Toulouse, France. The Germans had positioned many of the Dornier bombers, also known as the flying pencil, just outside the French city so that they could conduct bombing raids on allied forces at sea. The eight crew members involved in the crash were apparently killed on impact and the wreck ended up in the mountains. However, the mountains were also home to members of the resistance called ‘passeurs’ who helped smuggle allied troops over the peaks and into the safety in Spain. Fearing that the Germans would come looking for the bodies, local people decided to get rid of any evidence of the wreckage by throwing it down a 100 metre cave hole. Nothing more was said and the community remained silent about the crash — the event was buried just like the downed aircraft. Until now. 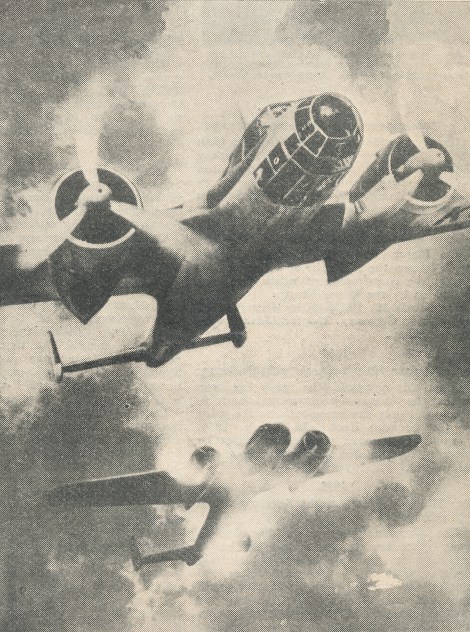 From the historic Library of Forces War Records.

Raking up the past… Raking up the past — a salvage operation is now taking place to retrieve the remains of the rare German bombers, of which no known surviving examples remain in tact in the world, despite some 1,700 being originally built. However, there has of course been the recent salvage of a Dornier from the English Channel, but even this example is badly damaged and is currently undergoing extensive conservation. Hundreds of German planes were shot down or crashed during the war, but none of them survived wholly because they were all broken up and melted down to make more planes or for other industrial needs. A Dornier wreck is pretty priceless, historically.

Not everyone sees the value in the past being dug up though, including some local residents like Mayor, Yvette Campan, who has lived in the nearby village of Sacoue all her life. She told the BBC that she remembers her grandparents talking about how they saw the crews' bodies scattered over a wide area and how scared they were when the two bombers crashed. The last thing they wanted was to attract attention.

There was never a local ceremony to mark the recovery of the wreckage - in her words the Germans were the enemy after all. She said if it had been a British plane that was being salvaged it would be a different story, stated the BBC article. On the plane hunt in France are mostly archaeologists and historians as well as some who are from the aerospace industry. Georges Jauzion, one of the wreckage hunters was a former pilot in the French air force and test pilot for Airbus, said that he wants to understand what really happened in the skies over this mountain range nearly 70 years ago. An important member of the group, Gilles Collaveri first started trekking for the wreckage after hearing long-forgotten stories of the wreckage and the cave — eventually he found something that matched eyewitness accounts. With some help from a local speleologist group to help him discover what was at the bottom of the cave they found some large charred metal sections of one of the lost Dorniers. It then took months of talks, haggling and paperwork to get the official permission to bring up the wreckage which was far from easy. Makeshift cranes and harnesses and manpower were all required because the metal had to be pulled up a narrow 100 metre shaft with many of the parts weighing more than 50kg. Wing sections, ammunition, remains of an oxygen tank and one cockpit with German instructions still in tact have so far been recovered. Apparently, the discovered pieces are relatively well preserved, but there is not enough to consider rebuilding the plane and it will end up in museums in Berlin and southern France. The Flying Pencil Slim and nimble, the Dornier 17 was originally designed as a fast reconnaissance aircraft and was nicknamed the Luftwaffe’s 'flying pencil' because of its narrow fuselage. Designed in the early 1930s, it was designed as a World War II German light bomber which was planned to be so fast that it could easily dodge defending fighter aircraft. It was less of a target and harder to hit than other german bombers because of its with its sleek and thin airframe. It had two engines mounted on a shoulder wing structure and had a twin tail fin configuration. The Dornier was capable of surprise bombing attacks due to its manoeuvrable handling at low altitude, which made It was popular among its crews. Along with the Heinkel He 111, the Dornier was the main bomber type of the German air arm in 1939–1940 and was used throughout the war, and it saw action in significant numbers in every major campaign theatre as a front line aircraft until the end of 1941. Production of the Dornier ended in the summer of 1940, in favour of the newer and more powerful Junkers Ju 88.

Source: Wikipedia & BBC News Magazine Do you have any WWII stories than have been uncovered and passed down through your family? Log on to Forces War Records and search your military past, or find out more about World War II by looking at our 'historic documents' library.
Log In / Register to comment
Your comment has been sent for approval. You will receive an email when it gets approved. Got It!