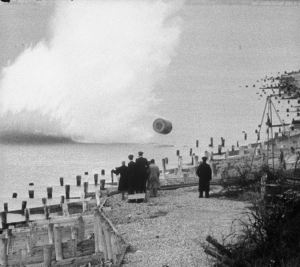 Bouncing bomb being dropped during a training flight by members of RAF 617 Squadron at Reculver bombing range, Kent. Picture from Wikimedia Commons.

Blogger: GemSen I don’t know about you, but I’ve been really enjoying all the news and events surrounding the 70th anniversary of the Dambusters the last couple of days. Just this morning on my drive into work I was listening to Chris Evans and his Radio 2 team broadcast from RAF Scampton. During the show the DJ talked excitedly about the bouncing bomb… And it is indeed an exciting subject when you begin to uncover just how strategic the design for the bomb and the actual bombing itself was…The more you learn about this devastating device, the more you realise just how clever the bouncing bomb and its creator, visionary aircraft designer, Sir Barnes Wallis actually were. But what amazes me the most about all of this was the limited amount of time the Dambuster pilots and Barnes Wallis had to prepare. It was a mission built on conviction and carried out with much determination and bravery. What an audacious plan… It was an audacious plan right from the very start: an air strike that would attack the heart of Germany’s industrial region – the Ruhr Valley. And for maximum effect the dams along the valley had to be attacked when the water levels were highest in May. The plan was given the go ahead at the end of February – not leaving much time at all. Wallis had around 8 weeks in which to perfect the bomb for the mission, including building it, designing it, constructing the carrying arms, and the mechanism to release it. He also had to look at modification of the Lancasters that were to carry it… However, the bouncing bomb idea had already a germinating seed in Wallis’s head long before 1943. The idea for 'Operation Chastise' originated in 1940 when Wallis, realised that smaller bombs precisely positioned at the foot of the dam could skip across the water and breach the Ruhr dams, but only if it was dropped at the right speed, distance and height above the water. And he was originally inspired by a concept used by 16th and 17th century naval gunners who used to increase the range of their cannons by bouncing them off the water like a pebble skimming across a lake. It started with marbles... Keeping in mind that the bombs had to detonate against a dam wall, Wallis started experimenting by bouncing his daughter’s marbles off the surface of a metal tub. From there he took his experiments to the National Physical Laboratory ship testing facility at Teddington where he used a 670 foot long water tank. Wallis discovered that applying backspin gave better results and the cylindrical shape was proven to be most suitable and stable. The exact science behind the bouncing bomb is extremely complex, but unfortunately as time has passed many of Barnes Wallis' vital working calculations have  been lost. That hasn’t stopped Dr Hugh Hunt and engineer from Cambridge though, who in a special Dambusters documentary, attempts to work out exactly how Wallis did it. Talking to Evans on the Radio 2 show this morning Dr Hunt said that during the programme, the pilots fly very low over a Canadian lake before releasing the bomb at a precise point so that it bounces across the water onto the specially-constructed concrete 130ft-wide 32ft-high dam. The programme 'Dam Busters: Building the bouncing bomb' is on tonight at 9pm on More4 - so it looks like I'm going to carry on my 'Dambusters' viewing for a little while longer...I wonder if the recreated bouncing bomb actually worked? Have you been enjoying the Dambusters news, events and programmes? Do you have any stories about the Dambusters? Were any of your relatives in Bomber Command or even part of Operation Chastise during the Second World War? Looking for the war hero in your family? Search the Forces War Records site, broaden your military genealogy research and delve into our records and historic documents library.
Log In / Register to comment
Your comment has been sent for approval. You will receive an email when it gets approved. Got It!