You think your job's a nightmare? Imagine having Hitler as your boss and the daily fear of being poisoned… 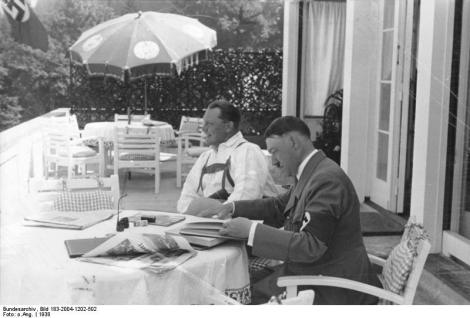 Blogger: GemSen Well, this was once a reality for one German lady called Margot Woelk, who kept her wartime job as Hitler’s food taster secret until recently, a few months after her 95th birthday. Reported by the Associated Press and covered by Fox News, Mrs Woelk even kept her secret occupation hidden from her husband through fear of prosecution for working with the Nazis. Only now in her later years has she felt like she could purge her memories and tell others about her experiences. Mrs Woelk sampled Hitler’s food for two and a half years along with 14 other women. “Hitler was so paranoid that the British would poison him – that’s why he had 15 girls taste the food before he ate it himself, ” said Mrs Woelk in an interview with the Associated Press. I suppose sampling food might not have sounded like the worst job at the time, especially with all the food shortages, but working for Hitler and the fear of being poisoned took away any enjoyment said Mrs Woelk. "The food was delicious, only the best vegetables, asparagus, bell peppers, everything you can imagine. And always with a side of rice or pasta, but this constant fear - we knew of all those poisoning rumours and could never enjoy the food. Every day we feared it was going to be our last meal." Hitler's security fears were brought to life in July 20, 1944, when a bomb was detonated in his guarded command centre, the Wolf's Lair. In the interview Mrs Woelk recalled the moment that the bomb went off. "We were sitting on wooden benches when we heard and felt an incredible big bang," she said of the 1944 bombing. "We fell off the benches, and I heard someone shouting `Hitler is dead!' But he wasn't. " After the blast nearly 5,000 people were executed following the assassination attempt, including the bomber, and things got very tense at Hitler’s headquarters so Mrs Woelk decided to return to Berlin and went into hiding. Apparently, the remaining 14 women on the food tasting in Rastenburg decided to stay there, unlike Mrs Woelk, and were all shot by the Russians after Soviet troops overran the headquarters in January 1945. On April 20, 1945, the Soviet artillery shelled the outskirts of Berlin  and ground forces pushed through toward the heart of the capital. Hitler commited suicide and his body was supposedly burned in the Reich Chancellory courtyard. After about two weeks of heavy fighting, Germany finally surrendered, ending the war in  Europe. After the war Mrs Woelk rebuilt her life and tried to leave behind the bitter memories and the shame of her association with the Nazis. It wasn't that easy though. "For decades, I tried to shake off those memories," she said. "But they always came back to haunt me at night," she added. Wow, what a story...And quite a sad one at that. What are your thoughts? Comment below and let us know... Source: Fox News
Log In / Register to comment
Your comment has been sent for approval. You will receive an email when it gets approved. Got It!