Commemorating the Fight for Britain’s survival, 70 years on... 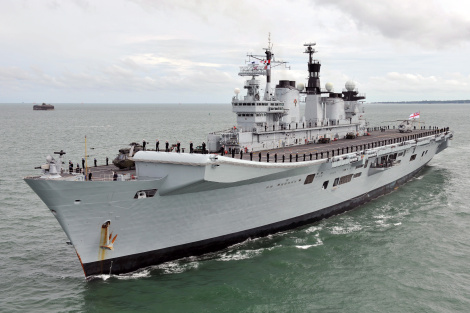 Did you see the news last night? How wonderful to see coverage of some of the events commemorating the Battle of the Atlantic, 70 years on. As part of the commemorations three Royal Navy ships have arrived in London and yesterday hundreds of people gathered on the banks of the Thames to watch helicopter and commando carrier, HMS Illustrious glide down the river. This was rounded off with a special service at St Paul’s Cathedral and apparently other memorials, fly-pasts and parades will take place. The series of special events kicked off on Tuesday when HMS Blyth and veteran destroyer HMS Edinburgh arrived in the Pool of London and moored near Tower Bridge at St Katherine Docks. HMS Edinburgh sailed up the Thames for the final time before her decommissioning in June later this year, which made the scene even more poignant. Were you there? Did you get to witness any of the warships as they made their journeys along the Thames? Perhaps you or a member of your family served on one of the warships? Comment below and tell us about your experiences. Today, fly-pasts are expected over Greenwich and the BBC One Show will be broadcast from the moorings of the 22,000-tonne carrier, HMS Illustrious, at 7pm. Commemorations in London will carry on until 13th May, and in Londonderry between 10th and 12th May to dedicate a new memorial statue by the Royal Naval Association, and in Liverpool between 24th and 27th May with a Cathedral Service, march, and fly-past. Navy News have reported also that tomorrow lunchtime, Illustrious’ ship’s company will perform the traditional ceremony of Paying the Dues at the Tower of London and on Saturday there will be a memorial service for the Merchant Navy in Trinity Gardens, Tower Hill, while HMS Illustrious is hosting a reception and dinner for the Fly Navy Heritage Trust Reception, which supports the vintage aircraft of the RN Historic Flight, such as the legendary Fairey Swordfish. A really great thing to do would be to have a look around these magnificent warships currently visiting London - and fortunately you will get the chance because they will be open to the public on the 11th and 12th of May. Will you be visiting? Fight for Britain’s survival The Battle of the Atlantic was fought to control vital shipping routes to provide a highway for the transport of raw materials, munitions, and men, to maintain the nation’s security and to project power across the globe. The Battle of the Atlantic was the longest continuous military campaign in World War II and the memorial events mark the height of battle during May 1945, when Germany’s submarine fleet suffered heavy losses in the Atlantic. Over the course of the battle, thousands of merchant ships and tens of thousands of lives were lost. As a struggle, the Battle of the Atlantic was a very crucial combat of World War II and was pivotal to the success of the allied side. After the fall of Europe, the main supply route for the continued prosecution of the war was between north America and the UK across the North Atlantic. It was the successful protection of this vital sea corridor by British and allied ships from the German surface and U-boat threat that led to success in North Africa, at D-Day and ultimately resulted in the fall of Germany. After the war Winston Churchill claimed that:

"The only thing that ever really frightened me during the war was the U-boat peril."

Source: BBC News, Navy news, Royal Navy You can find out more about World War II by looking at our historic documents library. Or, if you have any relations that were in the military - find out more about them by searching our war records via the Forces War Records site.
Log In / Register to comment
Your comment has been sent for approval. You will receive an email when it gets approved. Got It!