Commemorating the 11,500 ANZAC soldiers who lost their lives 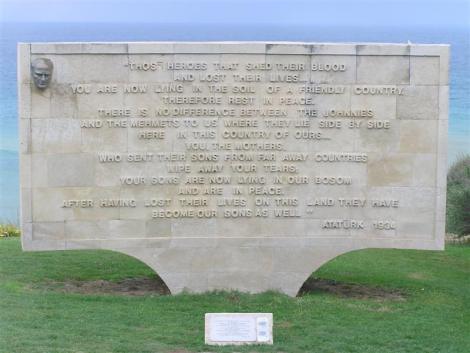 Blogger: GemSen Dawn services, reminders of the dawn landing on Gallipoli on 25th April 1915, were held at Gallipoli and France this morning. Thousands gathered at ANZAC Cove, a small bay, on the Gallipoli peninsula in Turkey, for a commemoration that honoured the 11,500 Australian and New Zealand soldiers who died in the campaign. The cove was the main base of the Australian and New Zealand troops for the eight months of the Battle of Gallipoli and has subsequently become a key site for ANZAC commemorations. With its steep and rough gullies, the ANZACs were never really meant to land at the cove and it was apparently only due to a navigational error that they did. Instead, they should have landed on a much wider front and longer beach. The ANZACs struggled in the rugged terrain, and found themselves under increasing pressure from the Turkish defenders. As the sun rose above the very cliffs that proved too steep for the ANZACs, at the dawn commemoration at Gallipoli this morning, Minister for Veterans Affairs Warren Snowdon described the eight-month Gallipoli operation as a "calamity". As reported by ABC News, Snowdon went on to say: "our Turkish adversaries, underestimated at first and defending their homeland, were the victors here on the peninsula." During the service a chilling account of the landing described the dysentery, the lice, the smell of death and the extremes of weather suffered by both sides during the campaign.

“It was difficult to imagine, let alone understand, the enormity of the suffering, loss and sacrifice, yet although it was so dreadful, it has become central to our nation's story,” Mr Snowdon said.

Defending the principles of freedom and democracy In April 1918, the Australian forces played a prominent role in driving out the German forces from Villers-Bretonneux, a town in France, in a battle that effectively ended the German offensive on the Somme. Villers-Bretonneux was cleared of enemy troops on 25 April 1918, the third anniversary of the ANZAC landing at Gallipoli. At a commemoration in France, Australian ambassador Ric Wells said:

"What nation today would be able to send a tenth of its population to the other side of the world to defend the principles of freedom and democracy?"

Here in the UK there was an ANZAC service in London's Hyde Park where Australia's high commissioner to Britain, Mike Rann, told the service the occasion was also about honouring those still fighting for their country today.

"In a time of terrorism, when the enemy is often unknown and unseen, we honour not only those who have fallen over the years but those who continue to bravely serve us in places like Afghanistan and in peacekeeping operations around the world," he said.

Source: ABC News Want to know more about Anzac Day? Read the ‘War Dairy and Account of Pt. Gordon James Alford 10th Battalion A.I.F’ who was a soldier during the Gallipoli campaign with an account of the landing. Search the ‘Memorial Register, Gallipoli 16-20, War Graves of The British Commonwealth 1914-1918, Cemeteries in Anzac and Gallipoli’, via the Forces War records site.
Log In / Register to comment
Your comment has been sent for approval. You will receive an email when it gets approved. Got It!

Enter your email address to follow this blog and receive notifications of new posts by email.
Join 9627 other followers