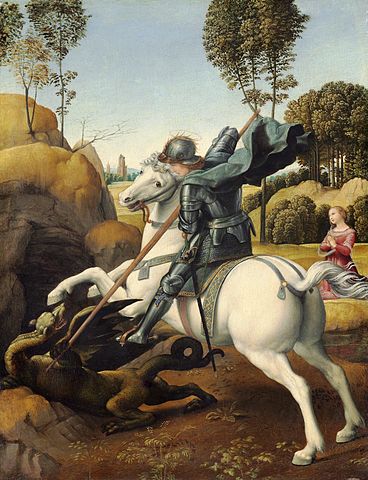 Blogger: GemSen OK, so the medieval legend of Saint George slaying a dragon might seem a bit far-fetched today, but it’s the principles of honour, bravery and gallantry identified by our patron saint that we should be celebrating. Today is a day to be proud of our English heritage and there are lots of things that put ‘great’ into Great Britain. Our rich military history is one of them and without the contribution of our brave troops and war heroes Britain would be a very different place. For instance, Andy Reid and Simon Weston are two war heroes that bear the marks of war and have shown great bravery and gallantry. As reported by St Helens Star, the pair recently met at a charity event the Rotary International Convention in Harrogate, and swapped their stories involving conflicts 30 years apart. Simon Weston, veteran of the British army is well known for his recovery and charity work after suffering severe burn injuries being on board Sir Galahad when it was attacked during the Falklands conflict in 1982. Today Simon takes the opportunity to convey his story to motivate people to overcome adversity. Andy Reid was a formal corporal with the 3rd battalion the Yorkshire regiment, and lost three limbs in an IED blast in Afghanistan in 2009. Andy said that Simon’s book was a source of inspiration when he was first injured and that it had: “helped him move forward”. “There may be 30 years difference between the conflicts we were involved in, but we were both helped by the Army Benevolent Fund (ABF) charity,” said Andy. The Soldiers’ Charity began as the Army Benevolent Fund in 1944 and today, the conflicts may be different, but the pressures on our soldiers remain. The charity gives lifetime support to serving and retired soldiers and their families. Soldiers risk their lives for us, and we should all spare a thought for all the courageous people who have served and are serving for Britain. St George’s Day should be about celebrating the great British spirit, which is reflected through our very colourful military history. Have you ever researched the military history of your family? If you want to find out more about your military heritage then take a look at the Forces War Records site - perhaps there is a war hero in your family just waiting to be discovered. What do you think makes Britain great? How are you celebrating St George's Day? Do you have any interesting stories involving great characters of war? Leave your comments below and let us know. Source: St Helens Star
Log In / Register to comment
Your comment has been sent for approval. You will receive an email when it gets approved. Got It!

Enter your email address to follow this blog and receive notifications of new posts by email.
Join 9672 other followers