February 13, 2013
By Forces War Records
Leave a comment
Military News
Share
Share on Facebook
Tweet
Post to Tumblr
Pin it
Submit to Reddit
Share on LinkedIn
Publish on WordPress
Send via Email
It isn't much of a place. A farm, a few houses and a bar gathered around a crossroads. Blink and you miss it - unless you notice the Welsh dragon flying from a wall and another opposite atop a flag-post. This is the tiny community of Hagebos (Iron Cross) near Ypres in Flanders in Belgium, and it is a community which has taken Wales to heart. Here on 31 July 1917, Ellis Humphrey Evans, better known by his bardic name Hedd Wyn, died. A soldier in the Royal Welch Fusiliers, he was taking part in the assault on Pilkem Ridge. This was the first act of the Battle of Passchendaele, in which over the next three months, 250,000 Britons and a similar number of Germans died. Almost a century on, Hedd Wyn is not forgotten. In the Welsh language, of course, his poetry lives on. In Hagebos there is a plaque to his memory. And in the Sportsman bar, a corner is devoted to him, complete with an Eisteddfod chair from his native Trawsfynydd. Once a month, on the first Monday, the people of Hagebos go a stage further. They gather to commemorate his sacrifice and that of Welsh servicemen and women in conflicts since. "I studied a bit about it," Marc Decaestecker, the owner of the bar told me.

"It was the Welsh who died here with Hedd Wyn. "And we decided with my neighbour to do something more for them. And we do it every first Monday of the month." This month around 150 people turned up. Belgian veterans stood to attention with their standards. Members of the local council were there wearing their sashes of office. The local fire brigade were on parade. A piper played a lament, a bugler the last post. Prayers were said by the Anglican vicar of Ypres. The commitment of local people to remembrance might be surprising - but not to him. "It really is quite moving to see. "It's local people, its not British people coming over for it. "If you hear them talk they want to remember, because they want to remember that in their dark days the British turned out to defend them." The most recent event was attended by campaigners for a memorial to all those from Wales - men and women - who took part in World War I. Their presence was why so many turned up. The Welsh Memorial in Flanders Campaign is planning to build a cromlech, or flagstone monument in time for the centenary of the war's outbreak. Langemark-Poelkapelle, which includes Hagebos within its boundaries, wants the memorial built there. They have even given land and promised to landscape the site, and a financial contribution worth around £30,000. 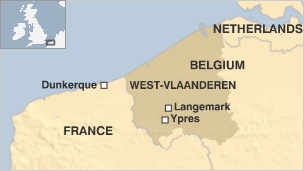 "For the town council what is very important is that we don't want just a tourist attraction," explained Lieven Vanbelleghem, Langemark-Poelkapelle's Schepen or Premiere Alderman. "We want to have something where you can really commemorate the things that happened 100 years ago." This part of Flanders is not short of memorials. There is a war cemetery at every turn. Local people live with constant reminders of war. In the area around Hagebos soldiers from Wales played their part. So many like Hedd Wyn paid the ultimate price. Here they are not forgotten. Source: BBC News
Log In / Register to comment
Your comment has been sent for approval. You will receive an email when it gets approved. Got It!