February 6, 2013
By Forces War Records
Leave a comment
Military News
Share
Share on Facebook
Tweet
Post to Tumblr
Pin it
Submit to Reddit
Share on LinkedIn
Publish on WordPress
Send via Email
Bonhams is to sell a copy of the last and most famous stanza of For the Fallen which begins, "They shall grow not old", handwritten by its author, Lawrence Binyon. It will feature in Part I of The Roy Davids Collection Part III: Poetry: Poetical Manuscripts and Portraits of Poets at Bonhams New Bond Street on 10 April offered at auction and is estimated at £5,000-8,000. 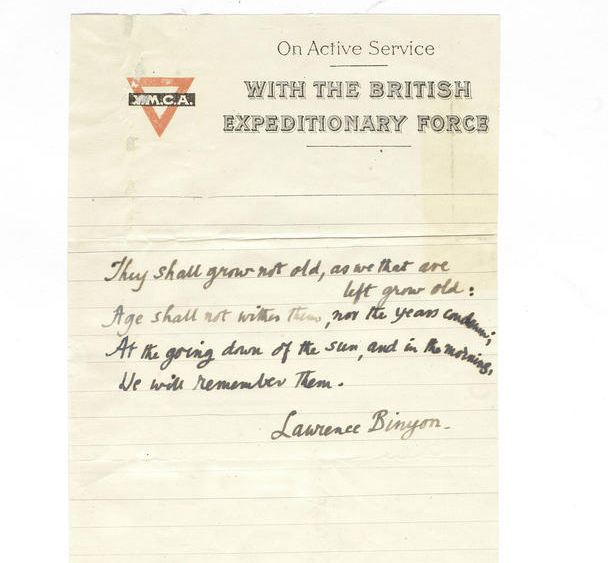 Rare handwritten copy of the Ode of Remembrance

The final verse of For the Fallen is commonly known as the Act or Ode of Remembrance. For many it is the emotional climax of Remembrance Sunday services not only in this country but throughout the Commonwealth and the words are often engraved on cenotaphs, war memorials and on headstones here and in the war cemeteries of northern France. The copy for sale was written some time before 1918 on British Expeditionary Force (BEF) headed note-paper. This is especially appropriate because when Binyon wrote the poem originally, in 1914, it was to honour the dead of the BEF on the Western Front and he later served as a volunteer medical orderly alongside BEF troops during 1915 and 1916. He was too old for active service. When For the Fallen was published in The Times in September 1914, casualties had started to mount and the promise of a speedy end to the war was already fading. The poem, and its final verse in particular, became and remains today a dignified and elegiac expression of national grief. The full text of the final verse reads as follows: 'They shall grow not old, as we that are left grow old: Age shall not wither them, nor the years condemn; At the going down of the sun, and in the morning, We will remember them' Source: bonhams press release.
Log In / Register to comment
Your comment has been sent for approval. You will receive an email when it gets approved. Got It!

Enter your email address to follow this blog and receive notifications of new posts by email.
Join 9632 other followers