Millions of men and women served in the British Armed Forces during the Great War 1914-18 and most were entitled to at least one medal for being there. Learn more on Forces War Records

A Guide to British Campaign Medals of WW1

After the Great War of 1914- 1918 (WW1), Campaign medals were issued on a scale never seen before. Millions of men served in the British Armed Forces during the war and most were entitled to at least one medal for being there.

It was intended that older medal traditions be followed and award the medals in silver with battle or operation clasps. The Army had many proposals, these totalled 79 and the Navy 68, though it was deemed to be complicated to work out who had earned what clasp and also to be too costly, so this idea was abandoned. Instead, it was decided that general War medals would be awarded and that all eligible personnel regardless of service branch or theatre of war would be given the same medal.

Nearly 5 million men passed through the British Army from 1914 to 1918 and though men who were stationed in the UK weren’t entitled to medals, any who served abroad were. If he served in a garrison such as Gibraltar and Malta a soldier was entitled to the British War Medal, but if he actually entered a theatre of war such as Gallipoli or France and Flanders, he also received the Victory Medal. Also, there was a grand number of civilian, nursing and Para-military personnel that were entitled to a medal.

In the end, only campaign medals granted for service in the Great War – the bronze 1914 and 1914-15 Star, the Silver British War Medal (and the bronze equivalent), the gilt-washed Victory Medal, the bronze Mercantile Marine Medal and the Territorial Force War Medal. Also, a Silver War Badge was available to officers and men who had been honourably discharged or had retired as a result of sickness or wounds from war service.

WW1 Campaign medals were impressed with the name of the recipient and usually included some or all of the following details: Service Number, Rank, First name or initial, Surname and military unit (Regiment or Corps). This was either impressed on the rim of the medal or in the case of the 1914, or 1915-15 star, on the reverse.

This Bronze Star was authorised in April, 1917, to be awarded to those who served in France or Belgium on the strength of a unit, or service in either of those countries between 5th August and midnight on 22nd/23rd November 1914. The former date is the day after Britain's declaration of war against the Central Powers, and the closing date marks the end of the First Battle of Ypres.

Recipients were officers and men of the pre-war British Army, specifically the British Expeditionary Force (B.E.F or the Old Contemptibles), who landed in France soon after the outbreak of the War and who took part in the Retreat from Mons (hence the nickname 'Mons Star').

The medal is a four-pointed star of bright bronze, unsigned with a crown, with a height of 50mm, and a maximum width of 45mm. Obverse has two crossed glade (swords) with blades upwards and a wreath of oak leaves, with the Royal Cypher of King George V at foot and central ‘S’-shaped scroll inscribed AUG 1914 NOV”. The reverse is plain with the recipient’s number, rank and name.

This Star is identical with the 1914 Star in every respect except that the centre scroll bears the dates “1914- 15” and the two small scrolls bearing “Aug” and “Nov” are omitted.

The 1914/15 Star was approved in 1918, for issue to officers and men of British Imperial Forces who saw service in any theatre of war against the Central Powers between 5th August, 1914, and 31st December, 1915, except those eligible of the 1914 Star.

Recipients of this medal also received the British War Medal and Victory Medal - it was never awarded singly. These three medals were sometimes irreverently referred to as Pip, Squeak and Wilfred with Pip representing either this medal or the 1914 Star, only one of which could be awarded to a soldier; Squeak represented the British War Medal; and Wilfred represented the Victory Medal.

The medal is a four-pointed star of bright bronze, unsigned with a crown, with a height of 50mm, and a maximum width of 45mm. Obverse has two crossed glade (swords) with blades upwards and a wreath of oak leaves, with the Royal Cypher of King George V at foot and an overlaying central scroll inscribed “1914-15”. The reverse is plain with the recipient’s number, rank and name.

The medal was approved in 1919, for issue to officers and men of British and Imperial forces who had rendered service between 5th August 1914 and 11th November 1918. Officers and men of the Royal Navy, Royal Marines, and Dominion and Colonial naval forces (including reserves) were required to have completed 28 days mobilised service – the medal was automatically awarded in the event of death on active service before the completion of this period.

This medal was issued singly without the Allied Victory Medal to certain regular and mobilized personnel who did not see any fighting.

The medal is a circular silver (or, in rare cases, bronze) design. Obverse shows a King George V bareheaded effigy, facing left, with the legend ‘GEORGIVS V BRITT: OMN: REX ET IND: IMP:’ (George 5th, King of all the Britain’s, and, Emperor of India). Reverse shows St. George, naked, on horseback armed with a short sword (an allegory of the physical and mental strength which achieves victory over Prussianism). The horse tramples on the Prussian shield and the skull and cross-bones. Just off-centre, near the right upper rim, is the sun of Victory. The dates 1914 and 1918 appear in the left and right fields respectively.

The Victory Medal (also called the Inter Allied Victory Medal) is a bronze medal that was awarded to all who received the 1914 Star or 1914-15 Star and, with certain exceptions, to those who received the British War Medal. It was never awarded alone. These three medals were sometimes irreverently referred to as Pip, Squeak and Wilfred.

The medal is a circular bronze disk, 36mm diameter. Struck in bonze, 36mm diameter with ring suspender. Obverse: the winged, full length figure of Victory, with her left arm extended and holding a palm branch in her right hand. The remaining space is left bare. Reverse: The inscription “THE GREAT WAR FOR CIVILISATION, 1914-19” surrounded by a wreath.

The medal is a circular bronze design of 36mm (1.42 in) diameter, with a straight bar suspender. The obverse of the Territorial Forces War Medal is the coinage head of King George V facing left, with the legend “GEORGIVS V BRITT. OMN: REX ET IND: IMP” The reverse has the legend “TERRITORIAL WAR MEDAL” across the top. Inside a wreath is the inscription “FOR VOLUNTRY SERVICE OVERSEAS, 1914-19”

This bronze medal was issued by the Board of Trade to commemorate the war services of the officers and men of the Mercantile Marine, as the Merchant Navy was then called, who served one or more voyaged through a danger zone. It was given in bronze only to officers and men alike.

The medal is a circular bronze design of 36mm, obverse has a bareheaded effigy of King George V, facing left, with the legend “GEORGIVS V BRITT. OMN: REX ET IND: IMP:” The reverse shows bows of a steamship with a sailing ship in the right background. There is a sinking submarine in the right foreground, which is very hard to distinguish as such. It’s in between the right-hand wave and the sailing ship. In exergue the inscription “FOR WAR SERVICE MERCANTILE MARINE 1914-1918” in three lines. Around the edge of the rim is a laurel wreath.

The Silver War Badge was issued in the United Kingdom to service personnel who had been honourably discharged due to wounds or sickness during World War I. The badge, sometimes known as the Discharge Badge, Wound Badge or Services Rendered Badge, was first issued in September 1916, along with an official certificate of entitlement.

The badge bears the royal cipher of GRI (for Georgius Rex Imperator; George, King and Emperor) and around the rim "For King and Empire; Services Rendered". Each badge was uniquely numbered on the reverse. The War Office made it known that they would not replace Silver War Badges if they went missing, however if one was handed into a police station then it would be returned to the War Office. If the original recipient could be traced at his or her discharge address then the badge would be returned. 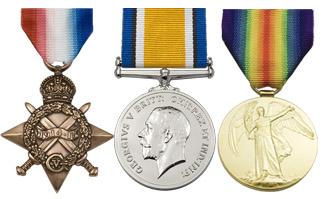 The most common combination of medals was the British War Medal and Allied Victory Medal pair, followed by the 1914-15 Star, the British War Medal and the Allied Victory Medal trio - often referred to by the nickname 'Pip, Squeak and Wilfred'. The medals' nicknames come from a popular comic strip of the time from the Daily Mirror newspaper. Pip was a dog, Squeak a penguin and Wilfred was a baby rabbit.

The British War Medal and Victory Medal are on display together they are sometimes known as “Mutt and Jeff”.

Miniature campaign medals are entirely unofficial, at least in so far as the recipient has to purchase his or her own examples from whatever source and at whatever cost suits them. They were worn by officers and other on social occasions, in mess dress or formal wear and were intended to be lighter and more elegant in such dress than the larger, heavier official awards.

Campaign, Gallantry, Coronation & Jubilee, Efficiency and Long Service Awards - Forces War Records are pleased to introduce you to a FREE comprehensive resource featuring an extensive database of military medals and awards. From Waterloo, Crimea, WWI, WWII to present day you will find wide range of medals and awards that were issued in recognition of service and personal accomplishments of individuals in the Armed Forces (and some civilians) all in one place.